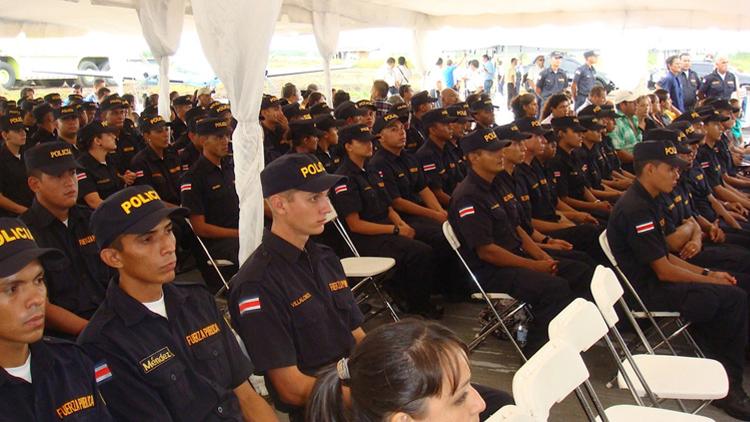 As have other Central American countries, Costa Rica has seen its share of drug trafficking in recent years. Cartels move cocaine by air, land, and sea, and Costa Ricans who once boasted of their peace and tranquility are increasingly worried about crime.

Unlike its neighbors, however, this country of 4.7 million has no army to call in. It abolished its military in 1948. These days it relies on a national police force, the Fuerza Publica, of roughly 14,000 to keep the peace.

The lack of a military hasn’t kept Costa Rica from doubling down on security, though. In fact, its internal security spending increased more than that of any other Central American country in recent years, growing 123 percent from 2006 to 2012 to US$331 million, according to a study by the Stockholm International Peace Research Institute.

“You need to invest in policing – that’s important – but we’ve also taken an integrated approach that favors prevention,” says Max Loría, deputy minister for justice and peace. “If you don’t have a military, as is the case here, you have to take a different approach.”

Costa Rica went through what Mr. Loría calls “a crisis” in the late 2000s, when the homicide rate reached a record 11.5 killings per 100,000 residents, and cocaine seizures by the antidrug police spiked. Yet crime never reached the levels seen in Central America’s northern triangle, which includes the world’s most murderous country, Honduras. Even without a military, however, Costa Rica is taking the same tack as neighboring countries by investing heavily in security and trying to equip police with heavy arms.

But Loría says the government is also working with local municipalities to develop programs including conflict resolution and providing opportunities and job training for young people, among other things.

The approach appears to be paying off. The murder rate has fallen in each of the past four years to 406 killings in 2013, according to the Judicial Investigative Organism, giving the country a homicide rate of just over eight deaths per 100,000 residents, the lowest homicide rate in Central America. (The US rate was 4.7 per 100,000 in 2012.)

But the increased security spending has left Costa Ricans questioning how far the government should go in arming and training police.

The debate peaked in recent years as the United States offered military assistance to fight drug trafficking and the government moved on its own to change laws.

In 2008, then-President Óscar Arias authorized the police to use military-style weapons, such as automatic machine guns. A court later nullified the decree, but it struck at the core of the concern, says Pamina Firchow, assistant professor at the Kroc Institute for International Peace Studies at the University of Notre Dame.

“Costa Rica’s security problems are in large part due to the issues related to drug trafficking in the region,” Ms. Firchow says. “Therefore, they have increased spending to try to protect themselves from crime.”

But along with violent crime related to drug trafficking, “more petty crime [is] committed by immigrants who have not benefited from the same kinds of social investments as native Costa Ricans. This obviously means that Costa Rica must address issues related to social policies and not concentrate entirely on militarizing its police.”

Article by CSMONITOR with editing by QCR