Calgary-based mining company Infinito Gold is suing the Costa Rican government for over $1 billion because it rejected the company’s plan to build an open-pit gold mine in a tropical forest. 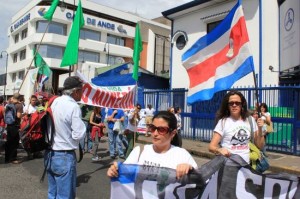 Costa Rica’s Sala Constitucional ( Constitutional Chamber of the Supreme Court), or Sala IV, rejected the company’s appeal to strike down an earlier court’s annulment of a mining concession for Las Crucitas, a planned open-pit gold mine in the northern region. It is estimated the mine would destroy 190 hectares of rainforest, which is home to many already endangered species, such as the green macaw.

In April Infinito Gold issued the government an ultimatum and set a six-month deadline “to resolve the dispute” or the company said it would pursue legal action. Infinito’s appeal to the Sala IV was the latest attempt to find a legal solution to the annulment.

Sala IV’s unanimous decision to uphold the annulment of mining concessions in November 2011 prompted Environment Minister René Castro to say, “Costa Rica has a reason to celebrate the decision. We do not want open-pit mining in our country,” adding that the ruling “enhances the ecological profile of our nation.”

Infinito Gold said it has already invested $92 million in the project, and it claims to have lost $1 billion in potential profit. However, Costa Rican authorities have indicated that Infinito owes Costa Rica some $10 million for damage already done to 300 hectares of tropical forest. The company has yet to pay.

The concession would have allowed the extraction of one million grams of gold in the area, a business estimated at the time at some $2 billion. In 2008, the company obtained a mining license after then-President Oscar Arias and his environment minister, Roberto Dobles, declared the project of “national interest”.

Infinito Gold’s spokeswoman in Costa Rica, Yoquebec Soto, said, “Our company will not leave the country until we are fully compensated.”

More than 4,500 people in Canada, Costa Rica, and around the world sent a message to Infinito Gold CEO John Morgan during the Canadian mining company’s annual shareholders’ meeting in Calgary, asking that Infinito drop its lawsuit against Costa Rica. They have been joined by more than 6500 who have signed online petitions.

Today, Monday, June 21, we are back to the two plates that cannot circulate, in today's case plates ending in 1 & 2 CANNOT...
Cine (Movies)