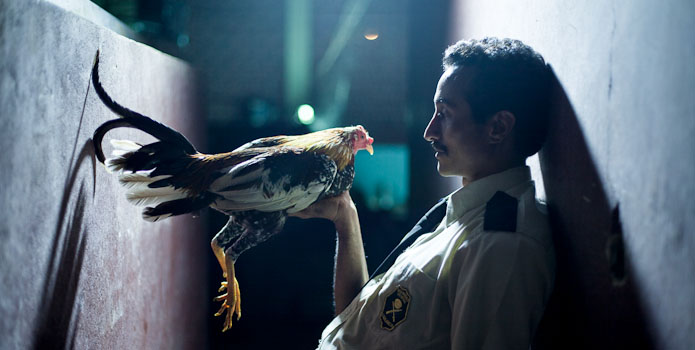 A security guard who wants to get into the cockfighting game buys, befriends, and becomes inseparable from his rooster protégé Rocky, in this winsome feature debut from Costa Rican director Neto Villalobos.

“Por las Plumas” (All About the Feathers) is about Chalo (Allan Cascante), a security guard who wants to get into cockfighting. He lives in an apartment above a fried chicken joint in a sleepy Costa Rican town — or, rather, he did live above that chicken joint before Rocky came into his life. 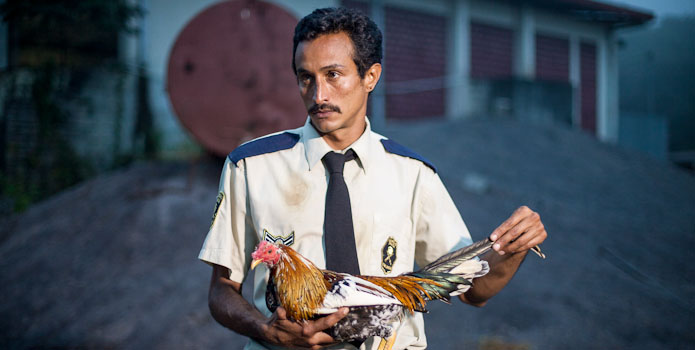 Chalo buys Rocky from a local grocer. He takes him home, caresses him, and whispers sweetly to him in bed. He has their photograph taken at a portrait studio. Chalo takes Rocky with him everywhere he goes. The problem is that Rocky is a rooster, and not everyone — landlords and bosses especially — is so tolerant of feathers, pecking, poop, and cock-a-doodle-doos, so Chalo is constantly searching for someplace he and his new friend can be together in peace. The winsome feature debut of Costa Rican director Neto Villalobos, All About the Feathers is a deadpan comedy, a story about the odd ways that friendships bloom. Think of it as a bromance between a man and his rooster. 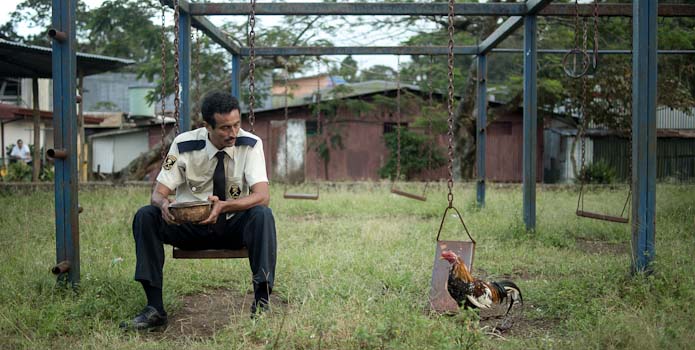 A support network unexpectedly develops around Chalo and Rocky. Among those who champion their cause is Chalo’s workmate, who likes to practice shooting, tell Bible stories, and discuss trends in cosmetics. There’s the kid Chalo meets on the bus who writes a song for Rocky that he performs on the trumpet. And there’s Candy (Sylvia Sossa), an Avon saleswoman who becomes Rocky’s protector when Chalo runs out of places to hide him. Tracing the idiosyncratic nature of these alliances — most often in scenes consisting of one deftly framed continuous shot — Villalobos cultivates a dry comic style reminiscent of early Jim Jarmusch: cockeyed, minimalist, and affectionately attentive to behavioural quirks — both human and avian. 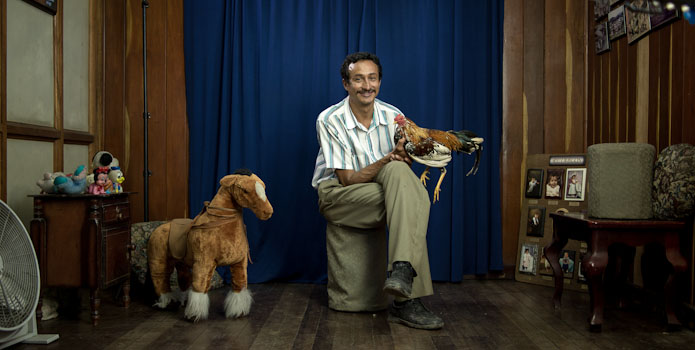 The film was directed by Neto Villalobos who studied sociology at the University of Costa Rica (UCR) and cinema at the Centre d’Estudis Cinematografics de Catalunya in Barcelona. His short films include 100 al Este, El Papá de Ernesto, and Jason, which screened at Cannes. All About the Feathers is his feature debut.

The Toronto International Film Festival (TIFF) is the leading public film festival in the world, screening more than 300 films from 60+ countries every September.

Starting out in 1976 as a collection of films from other festivals — a “festival of festivals” — the Toronto International Film Festival has become one of the most successful cinematic events in the world, universally regarded as an ideal platform to premiere films.

TIFF programmers have earned a reputation for excellence, and a diverse array of films are shown: Hollywood galas, complete with red carpet glamour; the best in international cinema, the latest homegrown comedies… and everything in between. Films are divided into Programmes to help guide choices.

The Toronto Film Festival runs from September 5 to 15 with screenings in venues like Roy Thomson Hall, the Winter Garden Theatre and Ryerson Theatre.