Costa Rica Gets Ready To Elect A President, Closing A Strange and Unusual Presidential Campaign 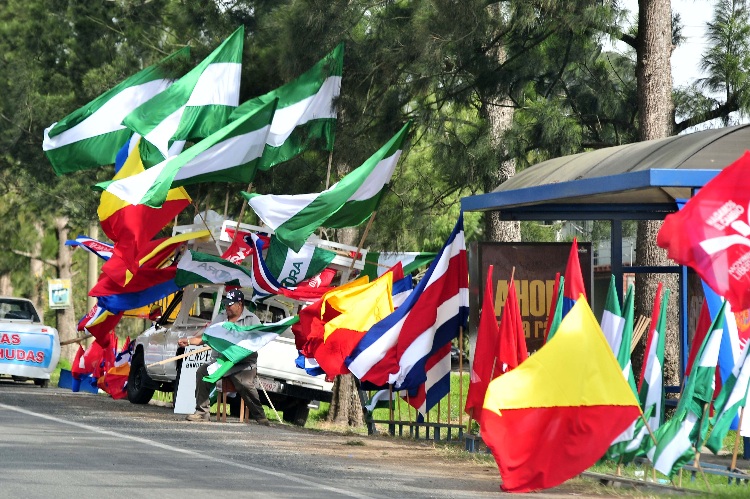 The man who could be president and has sat out most this election campaign, withdrawing from politicking on March 5, will sit out Sunday’s election as well.

Partido Liberacion Nacional (PLN) party presidential candidate, Johnny Araya, told the press Friday that he will stay home on Sunday. He is expected to make an appearance at Balcon Verde, the PLN campaign headquarters in La Sabana, a few blocks from the Araya home, after the election results are in.

Meanwhile, Partido Acción Ciudadana (PAC) presidential candidate, Luis Guillermo Solís, said he will be spending the time between today and tomorrow to call on his future ministers, looking to a secured win.

“I will start to make calls this weekend”, said Solís during a walk along the Bulevar (Avenida Central) in downtown San José.

Asked about his cabinet choices, the candidate says he has been spending a lot of time on the subject and will take full responsibibility for his choices, preferring to make them without handing the decision process to any other person or committee. “If I am wrong, it will be I who made the mistake”, said Solís.

The candidate said his choice of cabinet ministers will be announced in two parts, one on April 14 and the other on the 21st. For now, the only names we know for certain are the vice-presidential candidates, Helio Fallas and Ana Helena Chacón, who are expected each to head a ministry.

The election has been everything but ordinary.

This is the second time in the country’s modern history (after 1948) that a presidential campaign will be decided by a run-off vote. The last was in 2002 when Rolando Araya (brother of Johnny Araya) lost to Abel Pacecho. Under Costa Rica’s election rules, to be declared a winner, a candidate must receive 40% or more of the votes.

And, never has a presidential candidate withdrawn from an election. Araya, on March 5, one month after coming in second in the February 2 elections, announced that he would stop campaigning. Elections rules do not allow a candidate to resign, but do not compel a candidate to take active part in the campaign. Or vote for that matter.

Although Araya is out of the presidential race, his name is on the ballot and can be elected president. According to the head of the elections tribunal (TSE), Araya does not have to renounce his presidency if elected. In fact, the PLN candidate said publicly that he will serve out his term if elected.

Voter turn out on Sunday is expected to be low. That could work against the PAC.

Reading the comments on the social media, many are expected to vote for Araya, not that they want Araya a president, but don’t want Solis and the PAC, a party that some regard as “Chavista” in nature.