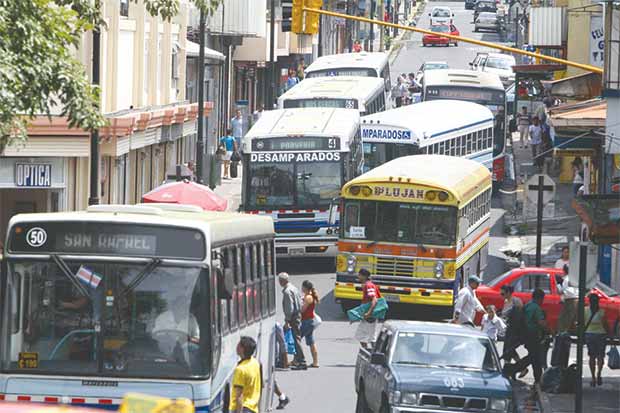 (QCostarica) The slow movement towards an efficient public transport system in Costa Rica, can be explained to some extent by the fact that a large part of government revenue, is related to vehicle ownership.

Just last year, the Ministry of Finance (Ministerio de Hacienda) took in some ¢255 billion colones in duties on the import of a record number of 73,000 vehicles.

Add to the import tax, the tax collected on gasoline sales, some ¢600 billion colones, all adding to million of reasons to keeping public transport in the slow lane.

Critics point out that the appointment of Liza Castillo last week as deputy minister of transport clearly shows the government is in no hurry to implement an agile, modern and secure system of public transport, which could eliminate the circulation of thousands of vehicles daily. Castillo is alleged to have ties to bus operators who are divided on electronic payment and the reorganization of bus routes, some operators completely against it and are impeding changes. Castillo’s appointment replaced Sebastian Urbina, who was forced to quit his post, following a confrontation with bus operators to force a change.

Doing so, the critics point out, would result in a significant reduction in the resources (tax money) the government takes in annually.

Esteban Arrietta, writer for La Republica, says for the government it is essential to receive this money, given that in recent years it had to borrow more to fund operating expenses, such as payment of public employee wages and pensions.

Arrietta continues to say that an efficient, cheap, quick and safe public transport and with electronic payment will likely sway many people to leave their cars at home, thus reducing traffic congestion.

Every day there is some 19,000 buses, including buses used for tourism, student transport and private use, on national roads, increasing congestion problems that account for some ¢330 billion colones in lost production, according to the State of the Union report last year.

- Advertisement -
Paying the bills
Previous articleCosta Rica Hopes to Capitalize On FTA With Colombia
Next article70 Costa Ricans Stranded in Cuba, Airline Says There Is No Fuel To Fly Them Home