Costa Rica Offers Visitors a Little Bit of Everything 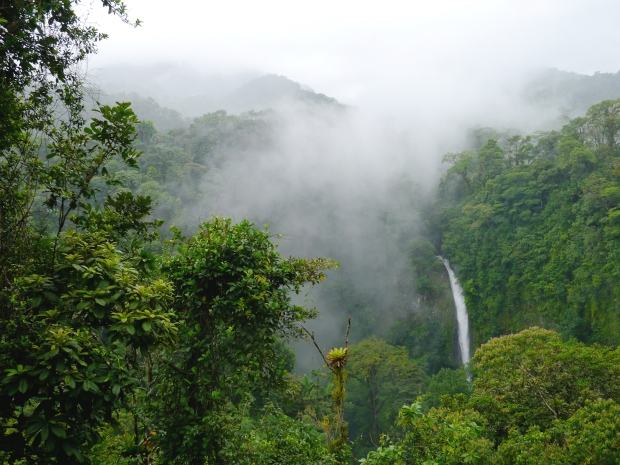 Whether you want to shred some waves or take it easy and spot wildlife, Costa Rica offers adventure for everyone.

On the secluded Costa Rican beach where I’m huddled with a couple of friends and half a dozen strangers, it’s pitch black except for some distant lightning and the luminescent crests of the waves breaking on shore. I’ve got a cramp in one leg and unseen insects are feasting on my bare ankles because I’ve forgotten to bring bug spray.

But I’m not budging because we’ve been told a giant Pacific green turtle, which our guides have been quietly watching in the brush behind us, is digging a nest in the sand and preparing to lay her eggs. Seeing that is a fair exchange for a little discomfort and a few bug bites.

When the guides have decided the turtle is intent on her task and we won’t risk spooking her back into the ocean, they lead us into the brush with infrared flashlights and we form a half-circle behind the turtle, whose shell is as large as an ottoman. We talk in whispers as she rocks back and forth and flicks up sand with her broad flippers, creating a deep hole for her eggs.

Finally, the turtle stops moving. “It’s OK now, she is entranced,” one guide says as he digs with his hands to widen the top of the hole and then illuminates it with a regular flashlight. We take turns peering in and I see a glistening white egg, the size and shape of a billiard ball, drop onto a pile of others already in the hole.

Even though we’ve been told we can talk now, no one is saying much of anything. Like the turtle, we’re entranced.

I didn’t anticipate that a nocturnal turtle-watching trip would be part of my week-long trip to northern Costa Rica, but I didn’t really know what to expect from this Latin American country best known for its coffee.

What I discovered was two countries in one: a temperate rainforest filled with showy tropical plants and abundant wildlife, and a warmer coastal region of sunny skies and surf-worthy beaches.

The best thing was that we didn’t have to choose between the two – jump in a car and you can drive from one region to the other in about five hours. And both are within one to three hours of the international airport near Liberia, which WestJet now flies to twice a week non-stop from Toronto.

We started our trip near the town of La Fortuna, in the shadow of the Arenal volcano, which erupted regularly until 2010. Now, the sleeping giant is a mist-shrouded backdrop to a cluster of hotels that sprung up to capitalize on its tourist-drawing displays of ash and lava. Luckily, the area has lots of other natural attractions to make up for the current lack of volcanic activity.

The Nayara Hotel, Spa and Garens is our temporary home. When I see the bed strewn with rose petals and the jetted tub for two on the deck outside my private casita, I feel a bit odd about staying by myself in a place clearly geared toward honeymooners and couples rekindling their romances, as most of our fellow guests turn out to be.

But I’ll get over it. The private deck with the outdoor Jacuzzi certainly helps.

After a breakfast of huevos rancheros, fried yucca and gallo pinto (mixed black beans and rice), we’re off on a floating tour of the Penas Blancas river, about half an hour from La Fortuna, with Desafio Adventures.

Our guide, José, does most of the work steering our inflatable raft down the river, but he warns us that he’ll need us to pitch in from time to time.

“OK, everyone backpaddle, backpaddle!” he calls out, and we dig our oars into the water to guide the raft back to where he has spotted something high up in the trees.

We are rewarded with the sight of a group of howler monkeys, some babies riding on their mothers’ backs, jumping from branch to branch and unleashing the spooky call that gives them their name.

One member of our group is eager to see a sloth and José doesn’t let her down – we spot both the two-toed and three-toed varieties languishing in the dense foliage, along with toucans, kingfishers, egrets, herons and iguanas.

There’s one thing you should resign yourself to before you visit Costa Rica’s rainforest, especially in the rainy season – you’re going to get wet. You don’t get all that lush vegetation without a whole lot of precipitation.

No matter how blue the skies look, they can turn grey and unload a torrent of rain with little or no warning. But since many activities are water-based, it really doesn’t matter.

It didn’t rain when we went on a canyoneering tour with Desafio near the volcano, but it wouldn’t have made a difference if it did – 20 minutes into our three-and-a-half hour tour, we were soaked to the skin. Rappelling down waterfalls and hiking waist-deep through rushing streams will tend to do that to you.

Later, as we took a much-deserved soak at the Eco Termales Hot Springs in La Fortuna, rain would have made a refreshing counterpoint to the steamy water soothing our tired muscles. And you’ll also welcome a cooling shower when you’re walking the 500 steps down to (and especially back from) the spectacular 70-metrehigh La Fortuna waterfall.

But we were due for a change of scenery and climate. As we crossed the continental divide that bisects Costa Rica into east and west, everything changed – the mist that had obscured our views for days gave way to clear blue skies, and lush jungle turned into dryer ranch-land. By the time we arrived in Playa Tamarindo on the west coast, we had peeled off our rain jackets and slathered ourselves with sunscreen.

Tamarindo is a typical small beachside town, with a string of restaurants, bars, souvenir and surf shops lining the main drag and one large hotel, the Tamarindo Diria Beach and Golf Resort, on the water’s edge. What we didn’t expect was the Canadian connection – hotel manager André Gagnon is a refugee from Quebec City, and he says a few hundred other Canadians have traded cold winters for Tamarindo sunshine.

Within half an hour of arriving, we were in our bathing suits and on the beach. For anyone who loves to surf – or who has never tried it, but secretly idolizes Kelly Slater – this is the place to do it. Boards and lessons are both available through the hotel, as are turtle-watching tours.

If surfing isn’t your speed, you can take an ATV tour down dirt trails to one of the more remote beaches south of Tamarindo. We stopped once on the way there to listen to a chorus of howler monkeys in the trees, and a second time to let a herd of cows cross the path to graze. It was worth doing battle with the bone-jarring ruts, but two pieces of advice: Bring sunglasses and a bandana to cover your face, and don’t wear white. You’re going to get dirty.

A catamaran trip from Tamarindo to one of the uninhabited bays that dot the coast requires no effort at all – you can snorkel and swim if you’re so inclined, or you can just lie on the deck and work on your tan . Get a friend to fetch you drinks and guacamole from the bar down below and you won’t have to move a muscle. For some, rain or shine, that’s the ideal Costa Rican vacation.

QCOSTARICA - Thursday morning, in an act full of...
National