Costa Rica Retirees Should Be Aware of Those Fattening Tamales 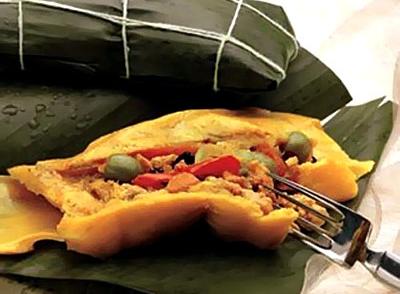 LIVING IN COSTA RICA – Part of living in Costa Rica is experiencing its culture which includes a variety of local foods. Tamales are a traditional fare which are widely consumed during the Christmas season, but many restaurants and supermarkets offer them year round.

They are made of a corn-based dough filled with boneless pork or chicken breast, potatoes, carrots, red belt peppers, green peas, onions, and green olives all wrapped in a banana leaf and tied together with a string.

Making tamales is a tradition that brings the family together and can take up to day. Every family member has a specific a task when preparing this dish. In days of old Costa Rican families would start by going to their backyard to select and cut banana leaves, and make a fire to smoke them.

The following morning, they would grind the corn to make the dough, cook the meat, wrap the ingredients in the banana leaves, and finally put them in a big pot and boil for a few hours making their texture is soft but firm. Nowadays families buy the banana leaves smoked and dough already made at a variety of places including supermarkets, outdoor farmers markets or any Central Market.

According to recent study, every December ticos consume million of tamales at the rate of three or more per day per adult with each household cooking around 200. And sixty-two percent of all Costa Rican families make there own tamales many of which are given as gifts to family and friends. . By the way, a tamaleada is the tradition of cooking tamales in Costa Rica.

Weight conscious retires should think twice before devouring three tamales or more a day like the ticos. Each tamale has around 800 calories and they are loaded with pork fat.

The tradition of making of tamales dates from pre-colombian times.

The indigenous peoples of Mesoamerica ( the region and cultural area, extending from Mexico to Costa Rica) first made tamales as offerings to their gods during religious ceremonies. They had over 500 ways to prepare tamales including the traditional style of wrapping them in corn or banana leaves. According to their recipes, tamales were made of tomatoes, chiles and ground seeds. After the arrival of the Spanish rice, garbanzos and green peas were included. Today pejibaje (fruit from the peach palm), chicken and pork are added. 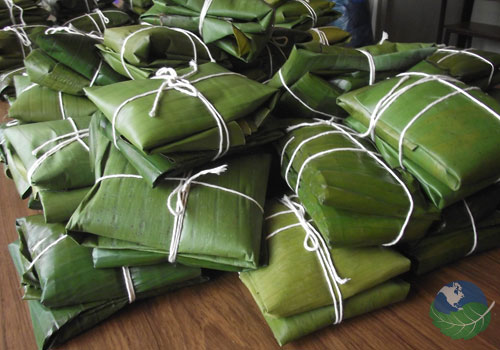 The word tamale comes that word tomallí which is part of the ancient language of Mesoamerica, Náhuatl. Tomallí actually means “wrapped food” in said language.

When the Spanish arrived together with Catholicism, the practice of making tamales was considered to be a form of paganism. But interestingly the conquers not do away with this tradition but ended up incorporating it into festivities like The Immaculate Conception of the Virgin Mary (the 8th of December) and the Birth of Jesus (the 24th of December).