The Chinchilla government announced Friday a plan to install access to the Internet in every public school in the country in order to reduce the digital divide and have better teaching tools. 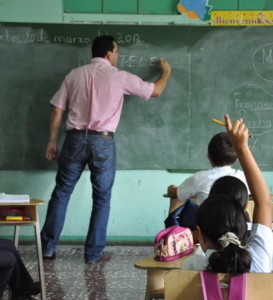 At present 4,800 public schools have access to the Internet and this year will reach 100% with the installation of the service in the 151 that still do not have it, the state-owned telephone and electric company ICE said in a press release.

The connections, most of them broadband, are part of a joint project of ICE, the Public Education Ministry  and the Science and Technology Ministry.

“We are committed in matters of education to reducing the digital divide,” Education Minister Leonardo Garnier said in a statement, in which he also noted “the importance of this for the future of education in Costa Rica”.

Costa Rica, a country of 4.5 million inhabitants, has around 940,000 students in public school.

The investment of Costa Rica in education is 7% of GDP and nearly 98% of the populace can read and write, according to official figures.

More than 90 percent of children complete primary education and 86 percent go on to attend high school, though the dropout rate at the secondary level is 11%.

QCOSTARICA - A 30-year-old man, who posed as a dentist, set up an office in the garage of a house in Siquirres, Limón, where...
Economy

QCOSTARICA - Costa Rica's banana growers reached an export record in 2020, despite the impact of the pandemic, shipping fruit in new markets and...
Pura Vida

QCOSTARICA - The quijongo is now in very good health thanks to the care of the people of Guanacaste, who are dedicated to protecting...
National

QCOSTARICA - Due to an improvement in the epidemiological situation of the health emergency, starting March 1, the only daytime vehicular restrictions for the...
Redaqted

QCOSTARICA - Four foreigners, including two minors, tried to leave Costa Rica using Covid-19 tests with negative results, which were determined to be falsified. The...
Immigration