Costa Rica is an advocate for peace.

A University for Peace student delegation visited the Presidenta Laura Chinchilla,  at Casa Presidencial in San José, as part of the International Campaign to Abolish Nuclear Weapons (ICAN). 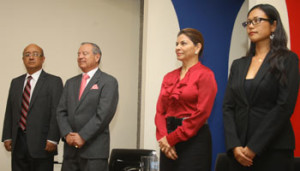 President Chinchilla signed a message of support for the “Treaty on the Abolition of Nuclear Weapons” in a special ceremony related to the paper crane project, which foresees sending 1000 paper cranes to every head of state worldwide as a symbol to encourage them to sign a treaty for the prohibition of nuclear arms.

“We need to applaud and recognize the important campaigns you [UPEACE students] have been carrying along many years. I would like to emphasize that the request that you make with these beautiful paper cranes does not fall on non-fertile ground here in Costa Rica and in the hands of the Presidents”, said Chinchilla.

Costa Rica, said the presidenta, stands precisely “for advocacy over and over again, through a set of facts, the calls for peace”, especially by abolishing their own army in 1948.

Dr. Victor Valle, Rector of the the University for Peace, pointed out the paradox that the five permanent members of the Security Council of the United Nations are the countries with the most nuclear weapons.

The ceremony was also attended by representatives of the Costa Rican government, legilsators and civil society, and diplomatic corps.
Chinchilla said Costa Rica, which got rid of its army in 1948, is an advocate for peace.

Q REPORTS - U.S. President Joe Biden is expected to outline his vision of Washington's Latin America policy at the next Summit of the...
National

QCOSTARICA - For their preparedness to face tsunamis, the communities of Tamarindo and Sámara were recognized by the Junta Nacional Tsunami Ready de Costa...
Health

QCOSTARICA - Five of the 82 cantons of Costa Rica register fewer than 10 active cases of covid-19 to this date, according to the...
Colombia

Q COLOMBIA – In less than two weeks, Colombia enters its first rainy season of the year, which will very possibly have an increase...
Pura Vida

QCOSTARICA - To commemorate the Bicentennial of Costa Rica that occurs in 2021, Inverse Project has designed the Torre del Bicentenario for this important...
Living in Costa Rica

QCOSTARICA - The Ministry of Public Works and Transportation (MOPT) announced Thursday that it will grant a grace period for six (6) more months...
National

QCOSTARICA - After almost three years of starting the work and four before that to the get contract awarded, authorities of the governments of...
Immigration

UPDATED: The DGME confirmed that anyone entering the country on or after December 17, 2019, will be allowed to legally stay until June 1st,...
Employment

QCOSTARICA - The latest unemployment figures show that women have been affected the most during the pandemic: more than a quarter of the female...