Costa Rica, We Have A Froglem… 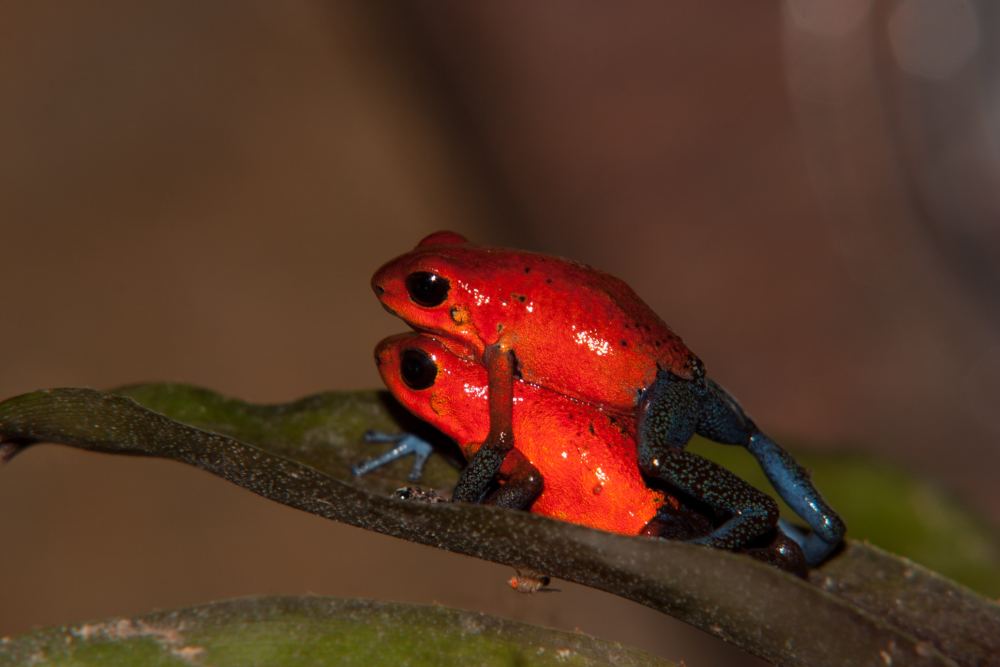 Costa Rica is home to the exotic, colorful poison dart frog. On their backs they wear some of the most brilliant colors on Earth, but they are also one of the most highly toxic animals on this planet. The microscopic amount of poison that this frog possesses is enough to make the human heart stop beating. However, the frog only releases it’s poison if it feels threatened.

These colorful amphibians have an average life span of 3 to 15 years. They only grow to be about 2 inches in length, but cradled within that tiny stature is enough poison to kill 10 full-grown adults.

The poison dart frog, or poison arrow frog, got its name from an indigenous tribe in Colombia, the Embera Choco. On the Pacific slopes of the Andes, this tribe used these frogs to tip their blowgun darts or arrows with the intense, devastating poison. The darts and arrows were used for hunting, or fighting, to aid the hunter by further impairing the hunted.

The green and black poison dart frog hunts and sleeps in the trees. To assist the frog in its climbing, they have small adhesive discs located on the end of their toes. These create a slight suction affect as the frog climbs. Here is a photo of one climbing the side of our house: 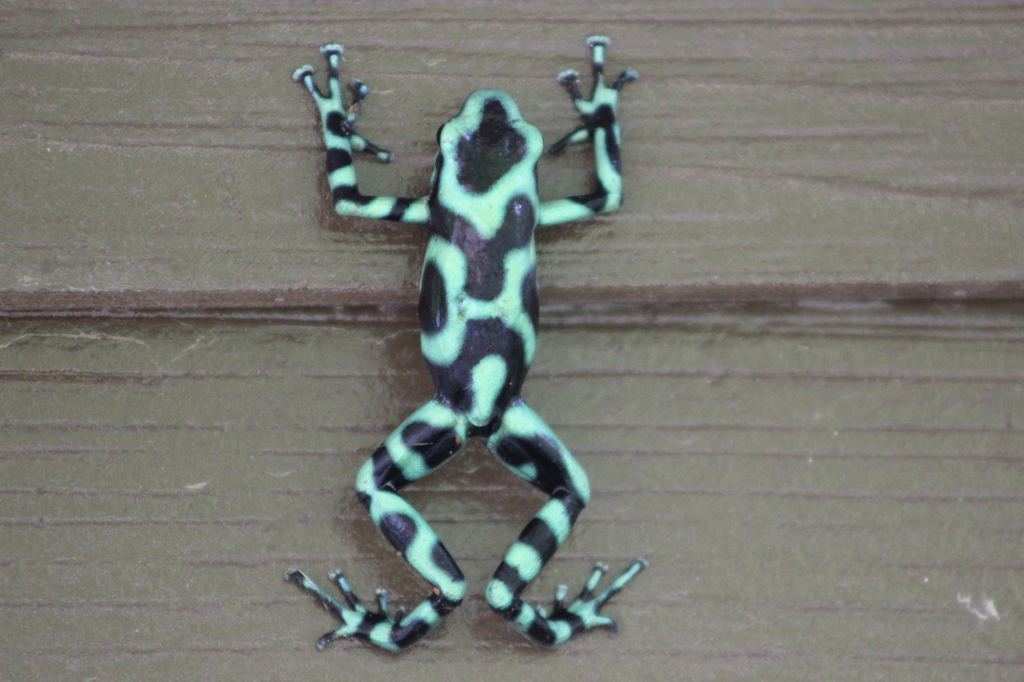 Neon in color, and small in stature, these adorable frogs are irresistible, to both humans and dogs. Andy and I have come across numerous poison dart frogs during our jungle walks, and I always have to remind myself not to pick them up.

Anyone who reads my blog regularly may remember ‘Sophie and the toads’. When it rains here, many massive poisonous toads swarm the area. Sophie has attacked a few toads, resulting in her becoming very sick. She always pulls through, but never seems to learn a lesson. She has become addicted to the poison and now seeks them out every time it rains.

You would think the smaller poison dart frogs would be less toxic than the huge toads, but they are actually much worse for dogs. Can you see where this story is going? Yes, a few days ago Sophie had her first encounter with a green and black poison dart frog, and it was not pretty, definitely not as pretty as they are.

I happened to be home alone, with no cell phone and no vehicle. She lunged for the frog and had him in her mouth before I even registered what was happening. I grabbed her and shook her until she dropped the frog. He hopped away in one piece, so I like to think he survived the mauling. Once I realized it was a poison dart frog I rushed her inside and googled what to do, while she foamed at the mouth and flung slobber everywhere.

Yes folks, it is 2016. If an emergency occurs, don’t panic…and google it. In this moment of having no car and no phone, I was immensely grateful to finally have working internet at our house. (A special thanks to The Pryors, Monica and Arne, and Mitch and Charlene for your help with this!)

I was able to research how to handle this situation, and I also facebook messaged our friend and neighbor Charlene, who graciously called the vet for me and talked me through what to do. She let me know she would drive us to the vet if it came to that. (At moments like this I am eternally grateful to live in a small village community where neighbors immediately jump in to help when needed. Thanks Charlene!)

Sophie had diarrhea and was vomiting and shaking for a few hours. I was told that if she was walking an hour or two after the incident, that she would survive. So after a few tense hours, I knew she would be okay. 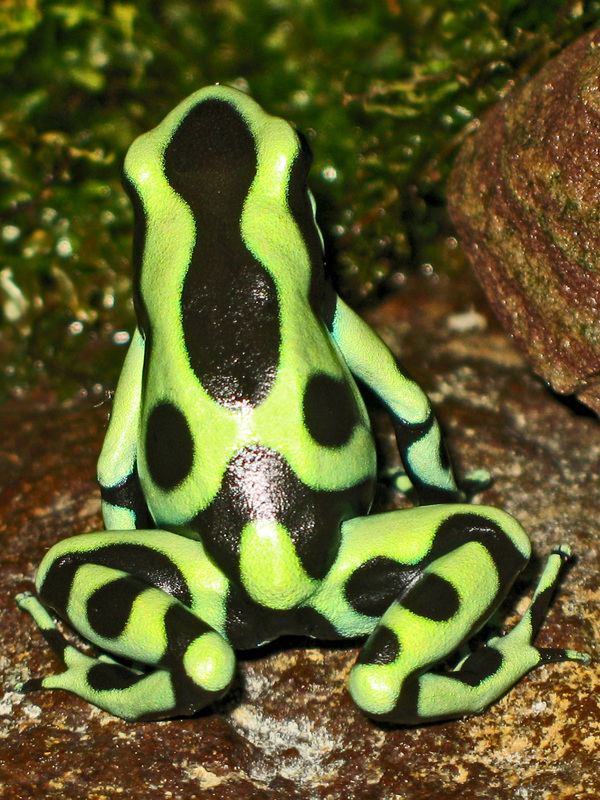 Here is what to do if your dog comes across one of these colorful little animals and cannot resist them:

1) Immediately and vigorously rinse the dogs mouth out, a hose is best. Do this for 5-10 minutes, at least. Rinse the dogs paws as well, in case any poison lingers.

2) If you have any charcoal on hand, crush it up and put some in the dog’s mouth, as this detoxes the poison

3) Call the vet and ask advice. They will advise whether to bring the dog in or not. Try to keep the dog cool and calm. The poison can cause seizures, or can cause a heart to stop beating, so keep a close eye on the dog and do not let them go to sleep.

I have a hippie pharmacy drawer in our house full of multiple essential oils, and I knew that frankincense oil is known to stop seizures in dogs. So I dabbed a few drops on Sophie’s head and kept her in an air conditioned room to keep her temperature down (any excuse to turn on the A/C, right?) Four hours after the incident, she threw up for the last time, and I could tell that she was feeling back to normal.

In my research I read that many people’s dogs have died from an encounter with these toads. I read about pit bulls and golden retrievers dying immediately after ingesting the poison. You would think a small dog like Sophie wouldn’t stand a chance. But she has morphed into a Central American robot with a stomach of steel, a jungle machine who devours anything that moves. Since there are no poison dart frog rehab centers in Costa Rica, it looks like since Sophie is addicted to kissing frogs that she is going to have to go back to being a leash-only dog.

Sorry weenie, no more roaming the hillside freely, in search of your next froggy high.

Birds, Snakes and Bats of Costa Rica: Nature Up Close