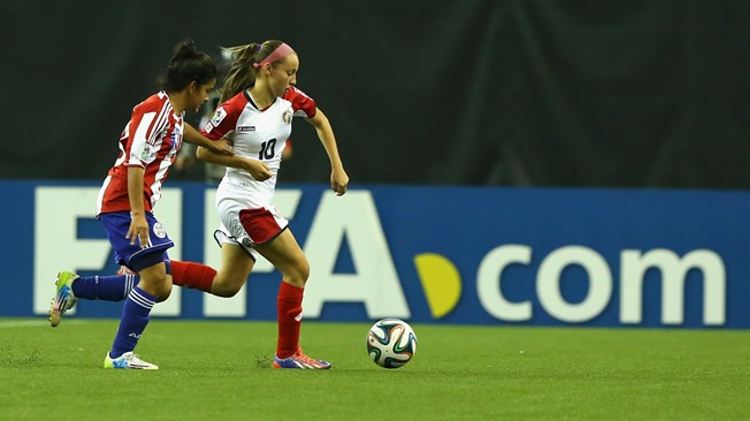 COSTA RICA SPORTS NEWS (FIFA) –It has already been a massive few months for Costa Rican women’s football, and the national team are now busily preparing in order to truly make 2014 a watershed year. Earlier this year Costa Rica successfully hosted the FIFA U-17 Women’s World Cup, becoming the first Central American nation to welcome the world for a FIFA women’s tournament.

Strong local interest over three sunny weeks last March and April proved there are solid foundations for the women’s game in Costa Rica. So too, some richly talented locals donned the red, white and blue adding yet more evidence of a prosperous future.

Now the spotlight falls to the senior national team who are aiming to crack the glass ceiling and qualify for the FIFA Women’s World Cup Canada 2015™ for the first time. Costa Rica have featured in several youth World Cups but the senior event is a hitherto unconquered summit.

Cause for optimism
With three of the eight nations at next month’s CONCACAF Women’s Championship to qualify automatically for Canada 2015, hopes are high among Las Ticas’ supporters. A fourth side among the octet – which also includes hosts USA, Mexico, Guatemala, Haiti, Jamaica, Martinique and Trinidad & Tobago – will play-off against the third best South American nation. Costa Rica were drawn into Group B along with Mexico, Jamaica and Martinique, and will play their opener in Kansas.

Costa Rica’s recent experiences at youth World Cups, which date back to the 2008 FIFA U-17 Women’s World Cup in New Zealand, is reflected in the make-up of their current senior national team. A youthful squad has few well-known names, with Paris Saint-Germain-based Shirley Cruz a notable exception. Many of the current group are graduates of recent youth World Cups including this year’s U-17 event on home soil; gifted attacking midfielder Gloriana Villalobos among them.

“Despite being a larger selection with some very young players, many of them already have up to two global experiences,” said coach Carlos Avedissian. “It is a (squad) selection that has many technical arguments given our opponents are stronger physically.”

Aiming for glory
One such player filling Avedissian’s description, and for whom the qualifiers will hold extra significance, is US-based forward Raquel Rodriguez. The Penn State University student is hoping to feature in the starting side after a two-goal performance during May’s Central American pre-qualifying tournament.

Rodriguez comes from fine footballing stock with father Sivianni playing professionally for Herediano. The San Jose-born 20-year-old recognises the value of the shared history among many in the group. “Many of us have been playing together for years, and we know each other’s game really well which is a major plus,” Rodriguez told FIFA.com. “With the chemistry we have we can overcome our lack of preparation.”

Rodriguez says that building upon the incremental growth in profile developed over recent years for the Central American nation is important. “I really think (qualifying) would really promote the game in Costa Rica and encourage female players to play the game,” she said. “It would also reinforce in society that soccer is not only for men, which sometimes is still the mentality back home.”

And what would it mean personally for Costa Rica to qualify for the first time? “It is a dream for me,” says Rodriguez, her voice changing tone slightly at the very thought of such an achievement. “It would be a major step forward for Las Ticas. It would be very special to be in the team that qualified for our first World Cup. I’m really excited about it. I hope we qualify.”

Berlin is the place to be: the best parks, cinemas, concerts, and cultural life attract many students every year. COVID-19 has changed the situation...
HQ