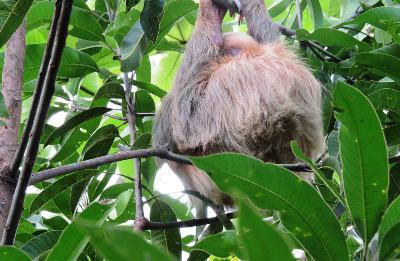 A female sloth that was victimized by two heartless men in the Southern Pacific region of Costa Rica has improved enough to be transferred to a new habitat. 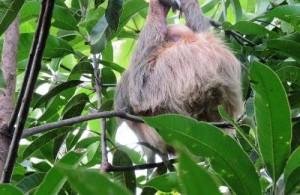 Officials at Zoo Ave, one of the best-known wildlife rescue centers in Costa Rica, confirmed that the sloth lost her sight as a result of being hit by rocks thrown at her head. Still, she has recovered well from her multiple injuries and is now a new resident of Zoo Ave’s own forest habitat for abused and injured wildlife species.

The sloth was named Sansita after Sansa, the domestic airline that agreed to medevac her from Golfito, close to the southern border with Panama, to the Juan Santamaria International Airport (SJO) in Alajuela. Upon landing, Sansita was rushed to Zoo Ave in La Garita, also in the province of Alajuela. She spent a couple weeks in a recovery space measuring about 20 meters in length, where wildlife rescue technicians and veterinarians changed her dressings and applied topical antibiotic every two hours.

As previously published in the Costa Rica Star, Sansita was subjected to a brutal attack by two execrable men in their thirties as she helplessly clung from her favorite tree. This odious aggression included punches and rocks thrown by the unidentified men, who were reportedly in their 30s.

Had it not been for the brave intervention by an unidentified farmer who confronted the men and rescued the sloth, Sansita would have perished. The farmer got in touch with local wildlife protection contacts and coordinated Sansita’s transfer to Zoo Ave.

As reported by daily tabloid newspaper La Teja, Sansita seems happy in her new arboreal home in La Garita, where she is negotiating tree branches quite well despite her blindness. She is two years old.