All 120 got their walking papers this morning.

“We are no longer employees of the station, all got their settlement, completely eliminating everything that is domestically produced and only going to get canned (foreign programs),” Lopez told La Nacion.

According to Lopez, the television station located in Santa Ana, starting Monday will not transmit anything produced in Costa Rica.

Gamboa added that the firing was not a surprise. “This is like when you have an ailing relative … everyone is gathering their things. We did not have a chance to say goodbye (on air),” said Gamboa.

The notice was signed by Ruby Silva, general manager of the station.

In a statement, Silva said that the financial troubles began two years, when advertising revenue in the country began to decline, forcing media companies to take action to restructure, leading to job losses. 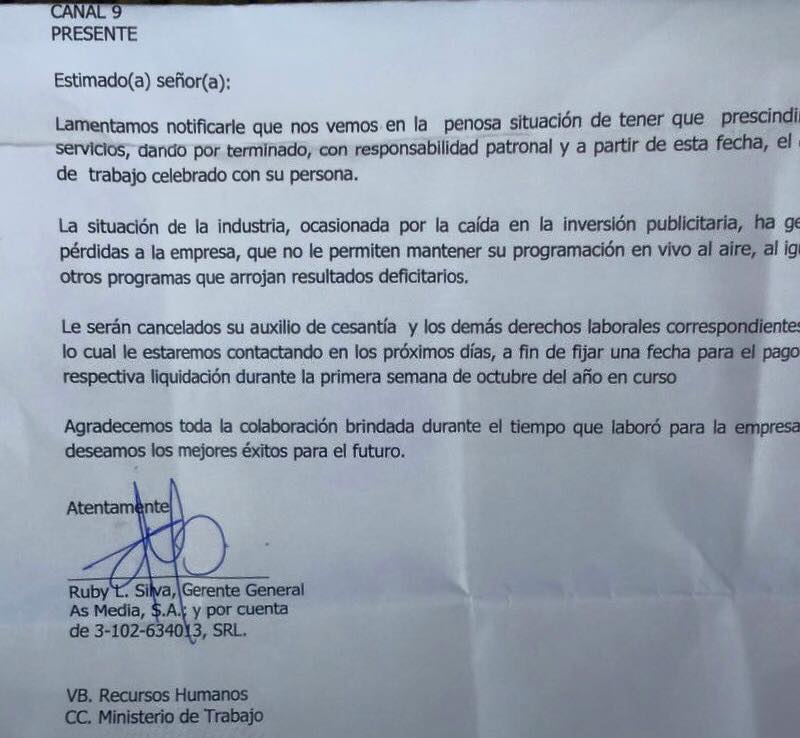 “Canal 9 tried to keep pace even under these difficult conditions, but we got to the point where we losses require us to take the sad and unwanted decision to shut down domestically produced programs and live broadcasting, like, for example, the Noticias Hoy and the print publications Su Mañana and Noveno Piso,” said Silva in the notice.

Canal 9 was up against the big guns, Teletica (channel 7 owned by Costa Ricans) and Repretel (channel 6 owned by Mexican investors) in attempting to obtain market share.

Canal 9 went officially on the air on October 17, 2011 at 7:00pm, with the face of journalist Freddy Serrano (moving from the channel 7 news anchor desk), and on-air personality Annelise School, among others.

Canal 9 was the first local television station to transmit completely in HD.

History
The Canal 9 frequency began airing on April 12, 1962, becoming the country’s second television station at the time. Over the years, Canal 9, through a series of buy-outs, became part of Repretel. In 2000 the channel was bought back by the Arnoldo Vargas, the original owner in 1962. In 2004, the channel was relaunched under the name Spectamerica, bought out in 2008 by the Mexican media group As Media and back in the air in 2011.

- Advertisement -
Paying the bills
Previous articleCosta Rica Attempts to Repatriate pre-Columbian Treasure From Venezuela
Next articleMonteverde & the Quakers: The Past that Preserved the Future

QCOSTARICA - The sustained growth in the arrival of...
Coronavirus