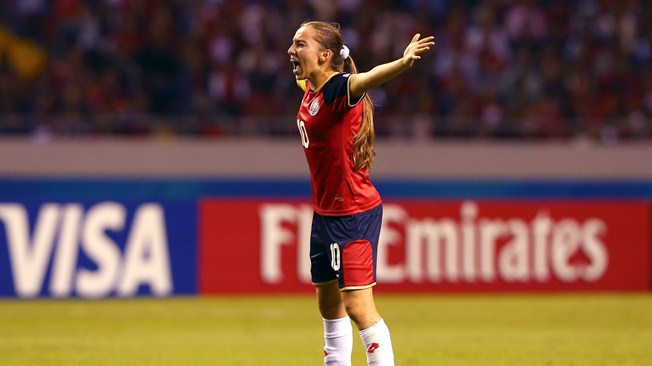 FIFA.com – That a national team coach should single out a particular player for special praise is nothing new in world football. Yet when the speaker is Jorge Pinto, the man in charge of the men’s senior Costa Rica side set to participate at the 2014 FIFA World Cup™, and the subject is a 14-year-old girl, it becomes apparent that the player in question is no ordinary talent.

“I’d love to take Gloriana Villalobos to the World Cup,” said Pinto of the Costa Rican teenager who is currently taking the FIFA U-17 Women’s World Cup in her homeland by storm. “She reminds me of Wilmer Lopez, she’s got the brains of ‘El Pibe’ [Carlos] Valderrama and she improvises superbly on the ball.”

Venezuela coach Kenneth Zseremeta was equally impressed by the youngster’s abilities in his post-match press conference following the teams’ opening outing at the tournament: “You have a wonderful player. We wanted to shut her out of the game but it was really difficult. That girl’s got a great future ahead of her.” Italy coach Enrico Sbardella also joined in the chorus of praise, saying: “She’s a great player and very difficult to stop. It’s hard to find a player that young with the qualities she has. We knew she could decide the game for Costa Rica on her own.”

However, Villalobos is not letting the compliments go to her head. “I’m keeping my feet on the ground,” said the wide-eyed No10, observing the bustle of the competition going on around her. “Their words motivate me to keep going. I’ve learned a lot over the last year and a half from training and the experience I’ve gained from the matches. Above all though, I’ve grown as a person.”

Villalobos speaks almost as quickly as she moves across the pitch. She roams from centre midfield out to the wings, then drops in just behind the striker, a tireless bundle of energy. Her diminutive appearance is misleading; out on the pitch her enormous character shines through, dribbling, spreading the play, creating chances, shooting, rallying her team-mates and driving the side forward, unafraid to express herself with the opposition or the referee.

“I’m not perfect,” she said. “I have to keep working. I have my team-mates to thank for everything I’ve got. They’re the ones who’ve helped me grow as a player out on the pitch.”

That combination of a down-to-earth temperament and hard-working approach led to coach Juan Diego Quesada handing Villalobos the captaincy. “She’s a key player.” he told FIFA.com. “She has so much ability and a great attitude both on and off the pitch. She’s completely dedicated to the game, studies what’s going on around her, and is disciplined and well-behaved. She’s a good team-mate and keeps a close eye on the rest of the group. She’s a great example for the other players because she does her talking on the pitch. She earned the captain’s armband. The rest of the squad appreciate her and support her.”

Villalobos, who started out playing football with her twin brother, has an increasing number of admirers but refuses to let herself be distracted.

“The future will reveal what God has in store for me,” said the self-proclaimed fan of Lionel Messi, Cristiano Ronaldo, Yeltsin Tejada and Marta. “I want to continue playing but I also want to keep studying,” she added, much to the delight of her parents. “She’s a student first and a footballer second,” said Villalobos’ father. “That’s non-negotiable for us.”

Having already been knocked out of the tournament, Las Ticas are aiming to bow out on a high note in their final match against Zambia at the Estadio Ricardo Saprissa Ayma in Tibas on Saturday. “We have to pick ourselves up after being eliminated and go for a win to say thank you to all the people who have filled the stadiums and supported us,” she concluded.

- Advertisement -
Paying the bills
Previous article[OP-ED] Why Always The Poor?
Next articleCosta Rica’s Food Bank Alleviates Hunger Of The Needy