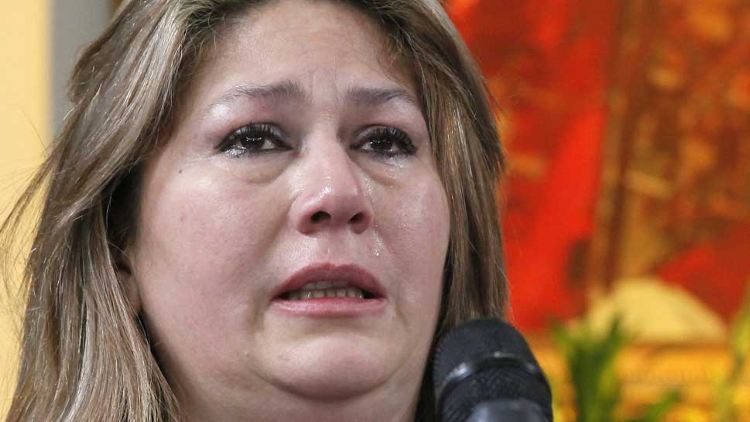 Floribeth Mora, the Costa Rican woman whose miracle allowed the canonization of John Paul II will be travelling to Rome for the saint-making ceremony that will take place in the Vatican on April 27.

The low-frills style of Pope Francis is having an effect on the upcoming canonizations of Popes John Paul II and John XXIII. Organizers of the event said Monday this week the ceremony is going to be a much more sober affair than the three-day extravaganza that accompanied John Paul’s 2011 beatification.

That 2011 event included a prayer vigil on Rome’s Circus Maximus field for tens of thousands of people and ended up costing several times the original estimate of 1.2 million euros (US$1.65 million). No such vigil is planned this time around. Cardinal Agostino Vallini, the vicar of Rome, said churches in Rome’s centre will remain open overnight before the canonization to provide a spiritual retreat for pilgrims, “but not much else.”

In Costa Rica, the celebration will begin two days before the event, with the travel of Mora for Italy. According to the bishop and secretary of the Episcopal Conference of Costa Rica, on Saturday there will be a great vigil at the Estadio Nacional (National Stadium) sponsored by the Obras del Espíritu Santo (Works of the Holy Spirit).

Monseñor (Bishop) Ángel San Casimiro, Archbishop of Alajuela, said each of the Dioceses in Costa Rica will have their own celebration that will include a high concentration of young and apolistic movements. On Friday, April 25, at the Alajuela Cathedral, San Casimiro will lead the blessing to thank God for the gifts given by the canonization of John Paul II and John XXIII.

Floribeth Mora recovered from a brain aneurysm after praying to Pope John Paul II – the second miracle attributed to the pontiff, who died in 2005.

It all started when Floribeth Mora Dìaz, then a 48 year old mother of four, woke up on 8 April 2011 with a strong headache. She was taken to the accident and emergency department at the Max Peralta hospital in Cargago and had a persistent pain for a couple of days. Then, on 14 April, she was rushed to the intensive care unit at the Calderón Guardia hospital in San José. Her angiogram test result gave her a terrible shock: she had suffered a brain aneurysm. 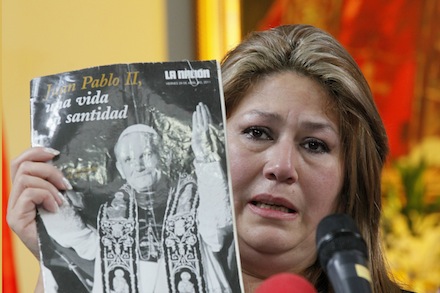 Mora said that the incident (the miracle) occurred after she returned from the doctor’s and watched the beatification of the former pope on television. After receiving the news she returned to her home in Cartago and while praying to John Paul II in her small bedroom she heard him say: “Rise! Don’t be afraid.” As she prayed, she heard his voice speak to her from his picture on the cover of a magazine. “I was surprised. I kept looking at the magazine. I said, ‘Yes, Lord,” and I got up,” she explained.

In July 2013, after Pope Francis signed a decree ratifying the canonization of John Paul and John XXIII, a tearful Mora said that after she finished praying she got up from her bed, prompting her husband to ask her, “My love, what are you doing here?”. Mora says she told her husband: “I feel better”.

After the incident, Mora’s condition rapidly improved and doctors could not explain the reason for this. According to her neurosurgeon, Alejandro Vargas, Mora’s condition was potentially fatal, but says he predicted only a two percent chance that the it would kill her.

However, Vargas admits that Mora’s sudden recovery is inexplicable.

“What we found remarkable, unbelievable really, was that by November there was absolutely no trace in her brain that she ever had an aneurysm. I had never seen this in my career,” he said. “It surprised me. I said, ‘It really is a miracle because I can’t explain it’”, Vargas told the media.

Throughout her illness Mora says her faith always remained strong. “I always kept my faith. I have always been a firm believer. I have a deep love of God,” she added

Mora’s recovery occurred in the same year that the first miracle attributed to John Paul II took place, when a French was nun cured of Parkinson’s disease.