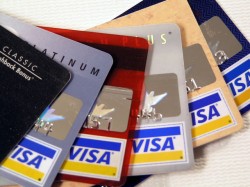 The Ministerio de Hacienda (Ministry of Finance) wants you to use your credit card. And to promote its use it is holding its first “raffle” of the year,   “Lotería Fiscal del 2013” with a total prize package of ¢50 million colones to those who have charged more than ¢3.000 colones with their credit or debit card.

The draw will be held today, according to an announcement made Tuesday afternoon by the Dirección General de Tributación Directa (Directorate of General Taxation).

For each payment of ¢3.000 colones or more during July, the issuingbank has assigned the customer a point to participate in the lottery. If payment with the card was made for professional services, each purchase is worth two points for every ¢3.000 colones.

There are six raffle prizes: one of ¢25 million colones, one ¢10 million, two of ¢5 million each, one of ¢3 million and one of ¢2 million, which will deposited directly into the cardholder’s account.