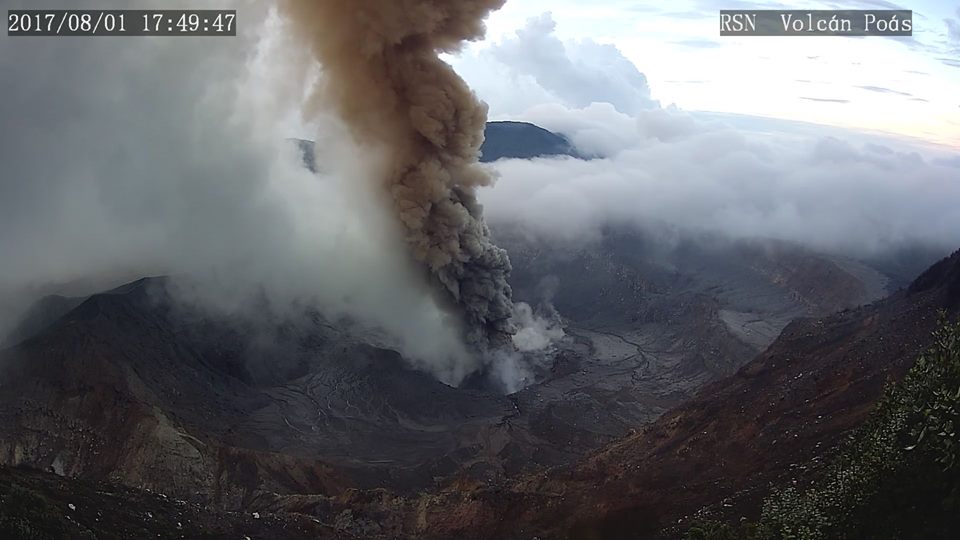 How do Costa Rica’s volcanos rate among the most active in the world? Pretty down the list.

Though locally the Poas and Turrialba continue to spew out gas and ash, even forced the closuse the San Jose airport on several occassions, they are tame in comparison to the following list of the 10 most active around the world, compiled by Msn.com.

Since mid-November 2017, Bali’s Mount Agung has been rumbling and spewing smoke and lava, in its first explosion in more than 50 years. Expecting a major eruption, Indonesian authorities have evacuated people living within the six-mile (10 km) radius and canceled flights off the island. They have also raised the alert level to the highest.
Take a look at some of the most active volcanoes around the world.

Located on the island of Ambae, the volcano is considered sacred by the people. It’s one of the most dangerously active volcanoes, with the latest eruption recorded in October 2017. Previous ones include one in September 2017 and another in 2005.

Grímsvötn is one of the most active volcanoes in the country. Its last major eruption was in May 2011 and caused the cancellation of many flights all over Europe.

Located in the Aleutian Islands, this volcano has erupted at least 22 times in the last 230 years. It last erupted on April 16, 2016.

At 10,925 feet (3,330 meters), Mount Etna is Europe’s tallest active volcano and has been erupting almost continuously for about half a million years. Its height keeps changing as volcanic material collects during eruptions and crater walls collapse subsequently. In May 2016, the volcano shot spectacular bursts of lava into the sky spewing forth from its Voragine Crater as it erupted.

According to the U.S. Geological Survey (USGS), this youngest and southeasternmost volcano on the Big Island of Hawaii has been in a constant state of eruption since 1983. The island has been expanding slowly over the years as the lava from the volcano dribbles down into the sea where it solidifies into rock.

One of world’s most active volcanoes, lying on the east of Madagascar, it has erupted more than 150 times since the 17th century. Also known as the “Peak of the Furnace,” it rumbled to life in August 2015 — its third eruption for the year after producing lava flows in 2007, 2008 and 2010.

Situated at the northernmost of Italy’s Aeolian Islands, this volcano has been in a state of near constant eruption for the past 2,000 years. It had a mid-eruption, where lava poured down the slope of the mountain into the Tyrrhenian Sea, in August 2014.

Located in the Pacific Ring of Fire that has 75 percent of the world’s active volcanoes, Mt. Yasur has been continually active for at least 800 years. In June 2010, the volcano experienced an explosive eruption, releasing lava bombs and volcanic ash.