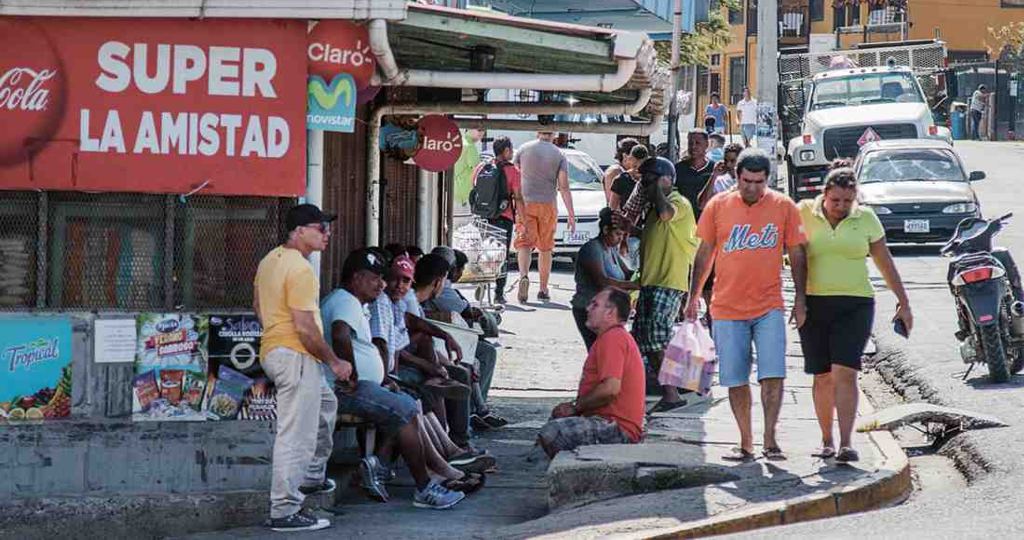 QCOSTARICA by Roberto Acuña Ávalos (Vozdeguanacaste.com) Neither the Ticos who pass through La Cruz at the end of the year nor the foreigners who come for the canton’s attractiveness manage to generate the cumulative profits from spending by the Cuban community that has been stranded in the northern city.

This was stated by Marina Peña, president of the Chamber of Tourism and Commerce of the canton, who affirmed that there was a rise in sales in the businesses, although she clarified that they do not yet have confirmed data.

“We don’t have statistics yet, but now the supermarkets are full. There are a lot of people downtown. The Cubans have brought more benefits [to the city] than what Hotel Dreams Las Mareas has brought in the entire time it has been open. Rather, the business owners tell me that they will resent when the Cubans go,” said the president.

The Voice of Guanacaste visited the county seat during the first week of January, when evidence was shown that some businesses doubled their business.

This has been the case for Abastecedor La Amistad, where cigarette sales tripled. According to Omar Reyes, store manager, before the arrival of the islanders, they sold a carton of cigarettes (10 packs) per month, whereas now they are selling three cases per month (each case contains 50 cartons).

“With so much cigarette sales, I even went ¢8 million ($15,200) into debt in cigarettes in order to supply enough, but, thanks to God, it has gone very well for us,” Reyes related.

Cigarettes are not the only product that has tripled, since another of the things that the Caribbean visitors are consuming the most are bananas. According to Jose Francisco Zeledon, who has a fruit stand at the farmers market on Thursdays, he went from selling three boxes of bananas to five.

For his part, Yeudy Elizondo, from Verduleria Los Machos, also had to increase the supply of bananas. Since the Caribbean islanders have been staying in the canton, they sell 30 boxes more of that fruit per month.

Elizondo also explained that their sales increased by 30% per month, not only due to the Cubans, but also because the restaurants buy more since they have more customers.

“What has increased most for me are fruits. The Cubans eat a lot of fruit, especially bananas. Another thing they buy a lot is potato and yucca. I also see people coming here to buy for the restaurants. I know how much I normally sell them and, yes, I am selling them more now,” said the businessman.

Restaurants that offer Wi-Fi Internet service are others who have benefited most because the Cubans look for service to communicate with their families.

One of these places is Pizza Cafe de la Cruz, who has made a killing with pizza sales. According to Neftali Mairena, his business, in addition to providing Internet, also sells pizzas and went from selling 8 large pizzas a day to 12 pizzas.

In light of the visit of the Cubans, knowing their situation, Mairena made a special price for the islanders, with a difference of more than 1000 colones ($1.90).

The bars also had high turnouts, like Mar de Plata, where the owner, Vera Gutierrez, noted that they started to sell more rum than usual.

“For me it is very difficult to say if it went better than in other years since, fortunately, we always have a lot of tourists in December. In addition, many Cubans came just to dance. What we did have was an increase in rum. Well, it is the liquor that is selling the most,” Gutierrez said.

Since many of the islanders lost their clothes on the trip, business that sell clothing had a lot of visitors but not much profit. As Miladi Vargas explained, they bought more from the discounted section, but they are items that could have prices of less than ¢500 (less than $1), so the benefit was not much.

According to the president of the Chamber of Tourism and Commerce, during the last few days of December and the month of January, the increase was less compared to the first few days, since the islanders’ wallets were emptying.

- Advertisement -
Paying the bills
Previous articleQToons: Transito Cracks Down On “Informal Transport”
Next articleLife on the Streets Of Guanacaste, Costa Rica

QCOSTARICA - The first big step on the planet...
Americas