“Daniel” Must Have Failed History Class

Coco Connect  – Recently Daniel Ortega, President of Nicaragua, made threat that he would reclaim Guanacaste.  I have a feeling that he may have been asleep during the his Central American history class.   Guanacaste was NEVER a part of Nicaragua.  Here’s a link to one of Ortega’s outbursts in the Tico Times. 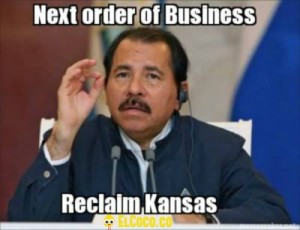 Below is an excellent write-up done by “What’s Up Coco“;  a Coco area news and events page on Facebook.   I look a little liberty with the addition of some pictures.

Below is a History that documents, with fact and dates, that Guanacaste has never been a part of Nicaragua.

In case anyone has not heard yet what can be taken as a major offense from Nicaragua to Costa Rica or as the best joke of the century: Daniel Ortega, President/current communist dictator of Nicaragua, announced in a speech commemorating an anniversary of the military in his country that, Nicaragua will reclaim ownership of Guanacaste before the international court of justice at the Hague.

Now, I alternate between being outraged and rolling in laughter, so ridiculous this statement is! Just in case, official Costa Rica has responded. The Legislature, the President, the Mayor of Nicoya and the Costa Rican Ambassador to Nicaragua have sent very strong “keep your hands off and wash your mouth with soap” letters to Daniel Ortega. The common folks on the streets have also expressed outrage and been flabbergasted at the outrageousness of the statement. And what about the people of Guanacaste? After all those are the folks whose nationality Ortega is announcing he will change to Nicas rather than Ticos…There is no question or ambivalence from the Guanacastecos. Their message is very clear: You will not be permitted to set foot in Guanacaste!

Now a Little History on Why Ortega Uses the Word “Reclaim” Guanacaste
This implies that at some point in history, Guanacaste was part of Nicaragua. Not at all! When all of Central America was colonies of Spain, years and years ago, there was what was called The Capitania General De Guatemala or the General Captaincy of Guatemala. The present day Central American countries which were then colonies, all reported to Spain as a block as part of this administrative entity with headquarters in Guatemala. It was divided in 4 provinces- not yet countries- and these were: Guatemala, Comayagua (the original name for Honduras), San Salvador and the province called Nicaragua Costa Rica which combined what are roughly the current countries of Nicaragua and of Costa Rica, in one single province.

Separate from this administrative structure there was a territory that was independent from all the 4 provinces of the Capitania General de Guatemala. This territory was called: “El Partido De Nicoya” and corresponds to what later became known as Guanacaste. This was an autonomous entity from its creation and while it had commercial ties to Nicaragua and also to Costa Rica, politically it was not part of either;reporting only to the Capitania General de Guatamala or directly to the Spanish Crown.

3 years prior to the Colonial Independence from Spain, a situation came up where the provinces of the Capitania General de Guatemala could have representation at the Spanish Court. HOWEVER, El Partido de Nicoya (now Guanacaste) did not qualify for representation as its population did not reach the required numbers. Largely for this reason, the “notables” as they are called, of this independent territory decided it was to their benefit to join one of the two colonial areas of either Nicaragua or Costa Rica which were close geographically and linked by economic and social ties – only- due to this proximity. And so, in a historical, unprecedented action, a plebiscite was held in which the people of the Partido de Nicoya voted their choice of which they wanted to join.  By their vote, the people of the Partido De Nicoya unanimously chose to become a part of Costa Rica. The name was changed to Guanacaste as it would no longer be an independant entity.   The Hymn of Guanacaste even includes these words in its lyrics: ” of the nation by our own free will” Guanacaste was never conquered by anyone, it chose it’s destiny and proud people that they are, they make sure that everyone, including the rest of Costa Rica, remembers it always.

Then Came the War
An American lawyer, journalist and adventurer named William Walker who organized several private military expeditions into Latin America with the intention of establishing English-speaking colonies (source: Wikipedia) attacked Granada, the most powerful city of Nicaragua at the time, and declared himself President of Nicaragua in October 1855, changing the official language to English and reinstating slavery which had been avoided years prior, among other radical changes. Franklin Pierce, 14th President of the USA, officially recognized his government.

The other Central American nations, chiefly Costa Rica, feared that Walker would take over their countries, too. In early 1857 the Costa Ricans attacked Walker’s forces led by their President Rafael Mora affectionately called ”Don Juanito” by Ticos , with the support of Guatemala, Honduras, and El Salvador as well as Vanderbilt’s money and men ( Cornelius Vanderbilt controlled a shipping empire and William Walker had made an enemy of him by suspending his right to ship through Nicaragua).
The only Time Guanacaste Appeared on a Map as Part of Nicaragua

In an effort to put more space between the opposing Costa Rican troops and his own forces, William Walker decided to redefine the international boundaries. The video shows how Guanacaste was a separate entity prior to the illegal redrawing of the map by William Walker, which included Guanacaste as part of the map of Nicaragua with the intention of placing a buffer between “Don Juanito’s” Costa Rican troops and Nicaragua. Thus, William Walker proved correct Costa Rica’s fear about his expansionist intentions. The war that Costa Rica declared was never against Nicaragua, it was against William Walker and his invasion of Central American territories. Walker’s army was defeated at the Second Battle of Rivas and this is what we commemorate every year on the National Holiday on April 11, the Day of Juan Santamaria, one of the heroes of that historical episode.

QCOSTARICA - Emilia Navas will not be removed from her position as attorney general, after calls for her to step down due to her...
Guanacaste

QCOSTARICA - No more soup for you! If the Minister of Public Works and Transport (MOPT), Rodolfo Méndez, has his way, the H. Solís...
Cine (Movies)