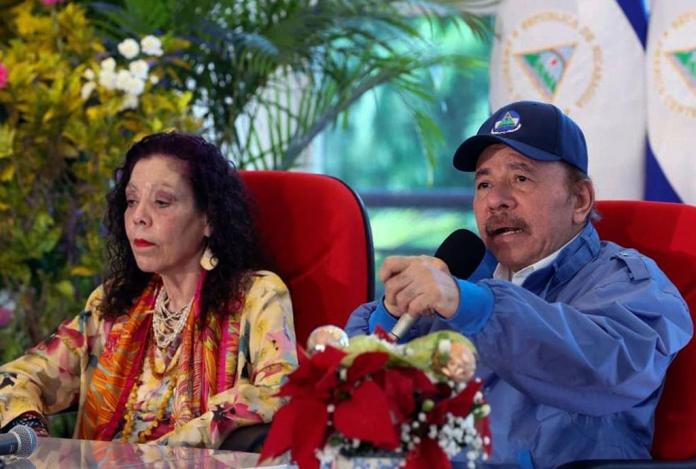 TODAY NICARAGUA – Daniel Ortega, who declared himself the winner of the disputed elections in Nicaragua, in his “winning speech” on Monday attacked the United States and his most virulent hate speech against political prisoners and invited the US to “have the sons of bitches of the Yankee imperialists”.

His attacks were also against the “fascists” European governments.

In celebrating a triumph not recognized by various countries, including Costa Rica, Ortega affirmed that the jailed political rivals, whom he accuses of terrorism, are no longer Nicaraguans, that they sold themselves to the Yankee imperialists long ago.

“When President Roosevelt was asked why he supported Somoza, he said ‘because Somoza is a son of a bitch, but he’s our son of a bitch’, that is, those who are imprisoned are the sons of bitches of the Yankee imperialists. They should have them, take them to the United States, because those are not Nicaraguans, they stopped being Nicaraguans a long time ago, they have no homeland,” he said in a speech broadcast on official channels.

In Nicaragua, the Yankees will never organize elections again. Headline from El19Digital

Ortega, to whom the electoral court controlled by him, reported 75.92% of the votes for Ortega, securing another five years in power to complete 30 years as the head of Nicaragua.

The electoral magistrates related to the president, in addition, granted the Sandinista party 75 of the 90 legislators of the National Assembly, allowing Ortega to effectively politically control the Executive and Legislative branches of government.

The Judicial branch has been under Ortega’s control for some time, during this year, the regime ordered the arrest or imprisonment of seven opposition candidates such as Cristiana Chamorro, Arturo Cruz, Félix Maradiaga, Juan Sebastián Chamorro, Medardo Mairena, Miguel Mora and Noel Vidaurre.

Chamorro, the daughter of the former president of Nicaragua, Violeta Chamorro, is accused of money laundering, while the others of conspiring to undermine national integrity.

The CID Gallup poll, published days before the voting, assures that any of the seven imprisoned candidates would have beaten Ortega in free and fair elections.

To demonstrate a democratic process in the November 7 elections, Ortega ran against candidates from five very small and largely unknown and underfunded parties, who have generally been allies of his government.

The CID Gallup poll revealed by the online portal Confidencial, which is run by Chamorro’s brother, Carlos Fernando Chamorro, and currently in exile in Costa Rica, again, that she would have defeated Ortega with 65% of the votes.

According to Ortega, the seven opposition leaders whom he imprisoned are “slaves of the empire, traitors of the homeland.”

Furthermore, during his speech, he asked to “reconsider the Spanish rulers”, of whom, he said, “are behaving like colonizers.”

The Spanish Minister of Foreign Affairs, José Manuel Albares, assured that what happened on Sunday in Nicaragua “cannot be called elections, they have been a mockery” of the people, the European Union, the international community and democracy, and demanded the liberation of opponents and journalists arrested.

“It is time for Europe to understand once and for all that the Nicaraguan people rule these lands and not the European governments,” he added.

QCOSTARICA - The dollar exchange rose again, after the...