In his end of the year message on national television, dictator Daniel Ortega spoke about the tragedies around the world and evaded the massacre of more than five hundred Nicaraguans and the repression against the population that flared up against his regime since the outbreak of the social protest in April.

Ortega also did not offer a negotiation with the sectors that oppose him to find a solution to the serious social, political and economic crisis is expected to worsen in 2019 due to the U.S. sanctions and the possible suspension of Nicaragua from the Organization of American States (OAS).

“We entered the process of reconciliation to move towards stability and to allow us to fight poverty … The challenge in 2019 is to complete the consolidation of reconciliation and peace in order to resume the path of economic growth,” said Daniel Ortega

In his speech of approximately half an hour, the Nicaraguan dictator spoke on different topics; but like his co-ruler Rosario Murillo, they never mentioned the victims of the massacre, or of the more than 600 political prisoners, the thousands of Nicaraguans who have left the country due to repression and lack of employment.

Ortega, on a national network that he forced on the media, began by greeting Castro’s dictatorship in Cuba that is commemorating the revolution of 60 years ago January 1.

He spoke of the humanitarian tragedies in Asian countries caused by earthquakes and hurricanes, he even recalled the more than two thousand Nicaraguans who died during Hurricane Mitch in 1998.

However, he did not mention the Nicaraguans murdered at the hands of the paramilitaries and the Ortega Police during the protests that started on April 18. 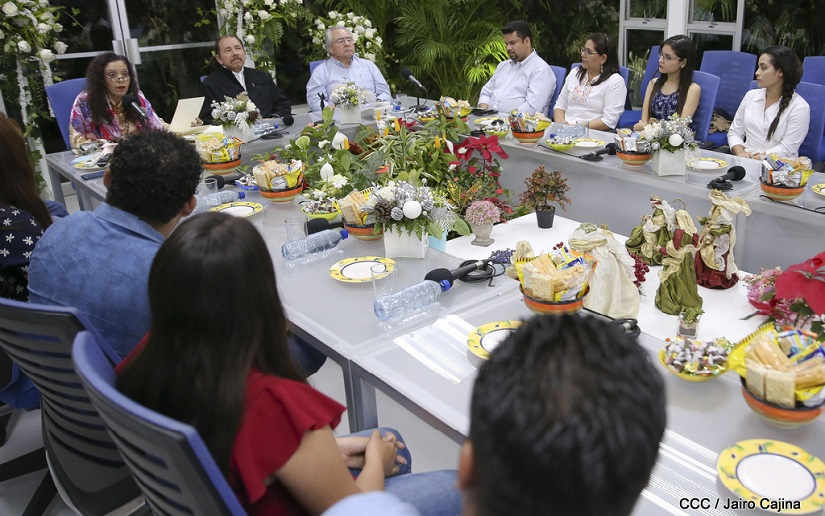 The estimates of the Nicaraguan Foundation for Economic and Social Development (Funides) is that in 2018 the economy will contract between 5.2% to 8.7%, and in 2019 the fall would be 5.2%t.

These scenarios could worsen if Nicaragua does not access loans from organizations such as the World Bank, the IDB and the BCIE, which represent seventy percent of the financing of public investment in the country.

The United States earlier this month approved the Nica Act that obliges its representatives in the World Bank and the IDB to oppose loans to the Ortega regime. CABEI funds and other agencies could also be blocked if the country is suspended from the OAS.

Ortega did not say how it will be possible to evade those sanctions to for an economic recovery.

Ortega was accompanied by his wife and vice-president, Rosario Murillo, Gustavo Porras, deputy president of the national parliament and trade unionist, and Fidel Moreno, general secretary of the Mayor’s Office of Managua.

The commentaries on the social media following the speech by Ortega and Murillo reveals a country divided, those who continue to support their president and those who did not hold back in their language, reminding us of  attacks on the roadblocks, kidnappings, tortures and threats against students, peasants, businessmen, civil society organizations, journalists and independent media.

This past week, the General Secretariat of the OAS, Luis Almagro, convened an extraordinary session to the Permanent Council to begin the process of applying the Democratic Charter to Nicaragua, an action that responds to the report of the Inter-American Commission on Human Rights (IACHR), which states that the Ortega regime had committed crimes against humanity.

QCOSTARICA - The Daniel Ortega government sent its ambassador to Costa Rica, Duilio Hernández, as its representative to the summit of Central American presidents...
Environment