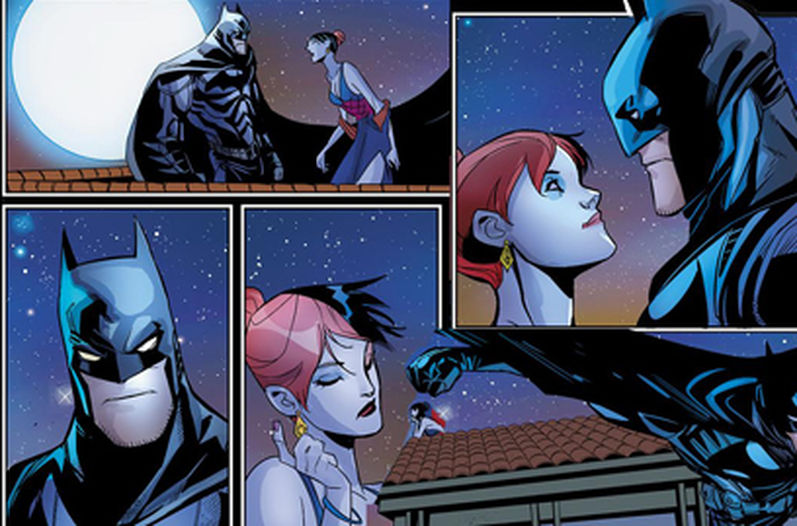 COSTA RICA EXTRA – To every one who has pretensions to illustrate, the draw a Batman strip is a dream, whether doodler or serious artist. But for Costa Rican cartoonist John Timms, who proudly admits to being a geek who has had the dream from adolescence, it has come true.

He was in charge of the major part of the DC comic, Harley Quinn Valentine’s Day Special that hit the stores last week.

Harley Quinn is a somewhat shady lady who buys handsome, mysterious bachelor Bruce Wayne at a charity auction for a night out on the town. Timms has been drawing Quinn since last year but this is his first time to have a chance at the Caped Crusader…

In the heady world of the fantastic, Timms has been in the major leagues with Quinn (a sworn enemy of Batman) and has done free lance work from both DC and Marvel.

It all began for him when he exhibited his work some of his work in Boomcom in San Jose in 2011, a pop ulture fair. One of the participants was Jimmy Palmiotti who gave him a chance at slling work to Marvel and DC Comics.

His first work was for Marvel’s Deadpool, a series about a mercenary antihero. His first work was done in pencil from Sa Jose–unless one is a fan of comics, one not many realize that illistrators do not usually write the plot of the strip nor color it. For Marvel he also did an X-Men gig for six months.

A resident of La Guacima, he has spent 42 years as a graphic designer and also works for Marte Estudio here. Although DC and Marvel are tyhe big boys in the world of Comic Con, publishers have a niche such as IDW for whom another Costa Rican, Franco Cespedes, does Star Mage.

Nor are the huge comic book concerns in the United States the only ones to publish illustrated stories. Cespedes illustrated a graphic novel for Editorial Costa Rica about the legend of the black Virgen, a book called El Hallazgo.

- Advertisement -
Paying the bills
Previous articleTransito Accepts Not Being Able To Control Street Racing (Piques)
Next articleOP-ED: Numbers To Remember