"I was wrong, I did not keep the distance outside my bubble and I did not use personal protective equipment," Rodrigo Marín acknowledges in his resignation letter.

(QCOSTARICA) Following the controversy and hailstorm of criticism over a weekend boat ride in Guanacaste, Dr. Rodrigo Marín, Director of Health Surveillance, and one of the outspoken voices in this pandemic to maintain strict sanitary measures, resigned this Monday.

Marin, on July 10, warned that  “It’s alarming, WE STOP PARTYING OR WE’RE F***“, tendered his resignation to the Minister of Health, Daniel Salas, in the early hours of this Monday morning.

In the resignation letter, Marín acknowledges that “it is certainly necessary to lead by example, and yesterday I was not consistent with the message.”

He refers to the photographs that circulated all over the social networks Sunday evening, in which he appears without a mask or face shield, and close together with other people on the boat in the waters of Nicoya.

“I was wrong, I did not keep the distance outside my bubble and I did not use personal protective equipment,” he said.

“These inopportune actions do not represent the committed action of the Ministry of Health and each of its officials who have been working tirelessly against the emergency,” added Marín. 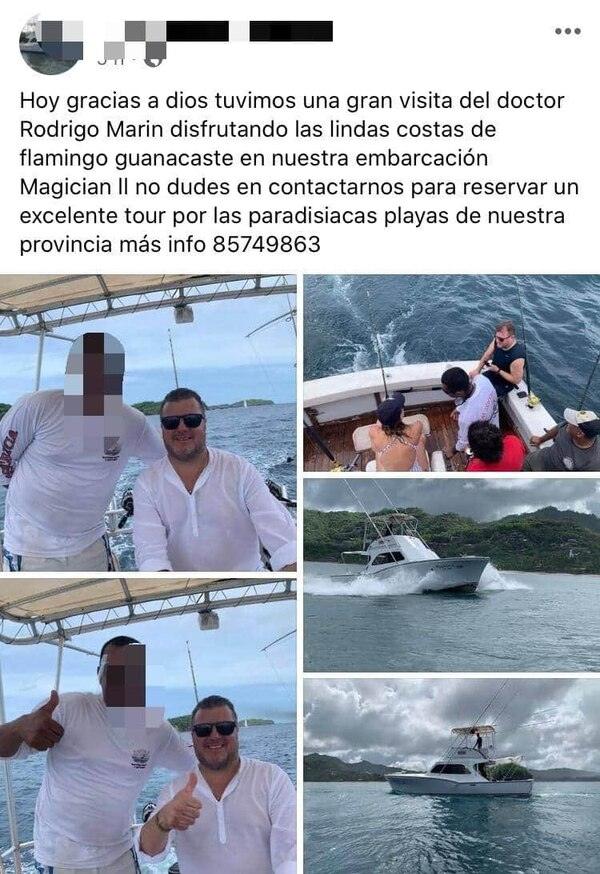 Marin, who was head of the Epidemiology department of the Ministry of Health, told Minister Salas that his “interest is not to muddy the prevention message that we have given to the population”; therefore, he decided to resign, effective as of this Monday.

Before tendering his resignation, on his Twitter account, Marín recognized early Monday morning having taken a boat ride this Sunday for leisure purposes on his day off, after allegedly reviewing the ICT-P009 protocol of the Costa Rican Tourism Institute (ICT) on June 15.

“Having said the above, I offer a public apology to anyone who considers that my actions were not due. I reiterate, I relied on the protocol of the ICT where it indicates that the captain is the one who must wear a mask. Tomorrow I will expand with more details ”, wrote Marín Rodríguez from his account.

According to reports, Marin was asked by his higherups to account for his actions following the appearance of the photos and comments on social networks Sunday evening. The comments varied of support that he has the right to do as he pleases on his day off, that he made a mistake but not the reason to resign, to calls for his resignation and many others that don’t deserve a public forum for their explicit language and message.

The director of Epidemiological Surveillance has been the second most visible face on the part of the Ministry of Health since the start of the pandemic, second to only the Minister of Health, Daniel Salas.

Marín Rodríguez coordinated for several years the vector control struggle in Costa Rica linked to the issue of disease transmission. From the second half of 2019, he was in charge of the Health Surveillance Directorate, in the Ministry of Health, where cases of contagion are seen.

Some of the comments published on Facebook Sunday night:

*HDP is “hijo de puta” short for ‘Hijueputa’ – derogatory, vulgar, idiomatic – son of a bitch; an objectionable, despicable person and any objectionable thing

**Dr Marin is Cubano-Costarricense – of Cuban origin and naturalized Costa Rican. He emigrated to Costa Rica in 1998.