COSTA RICA NEWS – Distinguished educator and former Minister of Education Maria Eugenia Dengo, 87, died Wednesday in Clinica Catolica Hospital in Guadalupe of heart complications. She received the Magon Prize in 2007 and was in public life for nearly all her adult years. 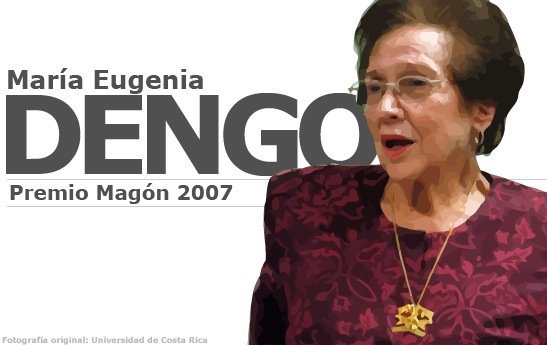 The renowned humanist always acted on the premise of the transforming power of education — both for individuals as well as their society. She taught at the University of Costa Rica from 1964 to ’72, directly touching the lives of many students of the era.

She also indirectly touched lives through her administrative skills, shaping the form of education at UCR as well as at the correspondence school UNED. At the latter institution she received an honorary doctorate. During the Administration of Rodrigo Carazo (1978-82) she was Education Minister.

Dengo was born in 1926 in Heredia to parents who, themselves, were distinguished educators. She wrote or edited four books, including compiling the writings of a famous relative, Omar Dengo. She is survived by her husband, musician Carlos Enrique Vargas, himself a Magon Prize winner, with whom she had six children.

Some of her other accomplishments were the foundation of the Emma Gamboa Laboratory High School, regional coordinator of Enesco for Latin America and the Caribbean plus her work at UCR and ENED.

QCOSTARICA - President Carlos Alvarado said he has all the confidence in his Minister of Public Works and Transport (MOPT, Rodolfo Méndez Mata, and...
Rico's Digest