Do What You Want And Don’t Worry!

In yet another case where the courts in Costa Rica send the message that, “yes, do what you want and don’t worry“, the drunk driver responsible for  the weekend accident that sent a little girl to the intensive care unit, was set free. 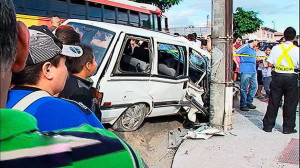 The 4 year old girl, who sitting on the front seat on the lap of her mother, was pinned between the door of the small van and the light post in the vehicle driver by her mother’s drunken boyfriend.

She is in hospital fighting to stay alive. Dr. Rodolfo Hernández, director of the Hospital Nacional de Niños (Children’s Hospital), describes her condition as “very critical”.

Yet, the man responsible for the accident was walking free on Monday, a testament that the country’s judges have no clue of the reality of the situation.

I ask, why would a mother carry her small child on her lap in the front seat? Why would she get into her boyfriend’s vehicle who was visibly drunk?

The only answers I can come up with is the Costa Rica society that has developed over the last several years, one where there is total lack of respect for everything and the inability to take responsibility. “Yo no fuí!” (It was not me).

In this case, it was disturbing to read the decision of the court to let the man go free, especially and equally disturbing when reading that the police had to confront an angry group in arresting the man at the scene of the accident.

The Fiscalía de Hatillo (prosecutor’s office in Hatillo) says it is preparing to formally charge him. But, like in many cases before and surely to more to come, this man will probably disappear,  protected by those who already showed by their actions in defending him against arrest, condone this type of behaviour.

The mother, so far has kept quiet on the issue. She was one of ten passengers in a small vehicle that had capacity for 5.

Worse is that this is not an isolated case.

The Hospital Nacional de Niños confirm that so far this year they have had to treat 35 minors involved in traffic accidents. That is almost 1 per day.

Costa Rica, it is time to respect the traffic laws and own up to responsible behaviour, not only behind the wheel but in everything.

It starts at the top with the leaders of “paradise” setting the example.

QCOSTARICA - It is totally false that the Government has changed the sanitary measures, as claimed by disinformation messages circulating on social networks and...
Redaqted

QCOSTARICA - The contagion or "R" rate for this Monday in Costa Rica reached 1.45, according to the analysis carried out by the Universidad...
Health

RICO's COVID DIGEST - While for many bringing back the vehicle restriction measures on the weekends was a surprise, not here, I expected that...
Breaking

QCOSTARICA - The spike in cases of covid-19 in recent days set off the alarms and has the authorities analyzing the possibility of bringing...
Rico's Covid-19 Digest

Q REPORTS (NY Times) When Raúl Castro retired as Cuba’s top leader Monday, he left a warning for a nation increasingly divided over the...