QCOSTARICA – Traffic accidents can happen at any time, and anywhere. But this one, Saturday afternoon in Escazu is a strange one.

It was at 4:20pm, on the Ruta 27, eastbound at the Escazu tolls when an Audi A4 ran into the concrete divider, bounces back, flying in the air and hitting another vehicle.

According to the 51 year-old driver, Carlos Calvo Coto, who said he fell asleep as he was to enter the “Quick Pass” lane.

“I feel asleep … I have only a slight head injury. The taxi driver was on the other side,” said Calvo.

In the accident, the taxi, TSJ 2771, was in the “manual” lane, waiting in his turn to pay, when the side of his vehicle was impacted by the Audi 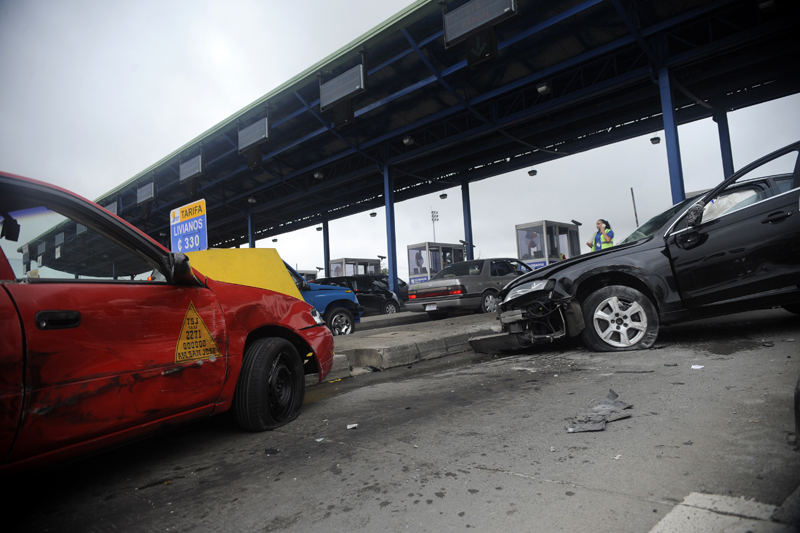 The taxi driver, Luis Arce Salas, said that it all happened quickly, “all I saw was the black car hitting the wall, bounce back and hit the side of my car”.

Salas was headed to Walmart Escazu with three passengers, who were not injured in the collision.

“If he had hit us in front, he would have for sure killed us instantly,” said the taxi driver.

As to the toll both collector, she suffered a nervous breakdown, requiring the medical attention of paramedics at the scene. She did not need to be taken to hospital. Globalvia did not release the identity of the collector, only saying she is a diabetic.

Use the comments section to tell us your toll booth story.

QCOSTARICA - Almost ¢140 billion colones (US$227 million dollars) is the amount the MECO construction company was able to snare for public works contracts...
Travel