Once again the train and vehicles come together in a collision, the fourth in two weeks. The latest occurring this morning at 6:30am in Barrio Cuba, on the south side of San José, near the San José municipal offices. 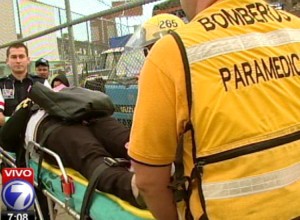 In the accident, five were taken to hospital for observation. The San Juan de Dios hospital reports all, including two minors and a pregnant woman, in stable condition.

Unlike the other accidents last week – three accidents in three consecutive days – the train did not suffer any damage and did not cause delays on the route. The vehicle, another matter.

The Ministerio de Obras Publicas y Transportes (MOPT) is in the process of installing 29 lights at train crossings. Only one is currently installed, near the MOPT offices in Plaza Viquez, the others will be up in two to three weeks.

QCOSTARICA - The prestige of the company of some of the richest men in Costa Rica hangs by a thread. For many, the MECO...
Business

QCOSTARICA - Osta Rica has been the epicenter of regional diplomacy in recent days. The successive visits of the Secretary of State of the...
Reports