Q TRAVEL – Ecuador vs. Costa Rica, Common problems. This is the second of two articles about Ecuador through the eyes of a writer living in Costa Rica. In former roles, Chris was an economist and ran a global corporation.

My wife and I visited Ecuador during the tightly fought election between the socialist, paraplegic and former vice president, Lenin Moreno and his capitalist opponent. After the usual protests of irregularities, Lenin was declared the winner. The locals did not understand why I thought Lenin was a funny name for a modern leader. 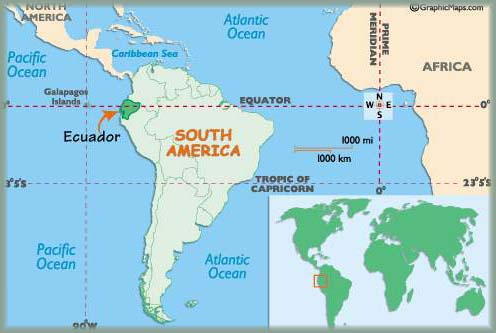 We saw peaceful demonstrations, including a man on the steps of a public building with his mouth duct-taped. Ecuador is currently seen as a threat to press and protestors’ freedom, but at least this fellow was not arrested.

Thus, like Costa Rica, Ecuador continues with a long-standing socialist program of state provided healthcare, education and public works. In both countries, there are widespread allegations of nepotism and corruption, just as there are in other Latin American and developing countries. Many citizens are frustrated that the bloated bureaucracies fail to deliver effective state programs in any of these areas. At the same time, soaring national debts are criticized by international rating agencies, the IMF and others.

Unlike Costa Rica, Ecuador decided to exploit its oil resources. Oil extraction soon became the number one industry. It accounted for nearly 30% of the economy when oil prices reached $160 a barrel. On the back of this windfall, two bad decisions were made. Firstly, as oil is priced in US dollars Ecuador decided to adopt the Dollar as its currency. In only a slightly less rigid way, Costa Rica fatally tied the Colon to the Dollar too.

The second error was to splurge all the income from oil on public works and social projects. Wiser oil producers, like Kuwait, invested much of their income in sovereign wealth funds. This is to see them through hard times. Dollarization in Ecuador and quasi-dollarization in Costa Rica led to huge public and private borrowing in dollars. This was all very well until the music stopped.

When the price of oil collapsed to $30 a barrel, it rocked the Ecuadorian economy. As you drive around the country, you see thousands of unsightly, unfinished buildings. Rusting rebar sprouts from incomplete upper stories. Construction stopped when the crisis hit. It has never restarted.

In both countries, world recession undercut the ability to repay the huge dollar loans. That left the respective governments floundering around trying to mask their bloated public sector pay and pensions while pressure continues to build behind the dollar credit dam. This is due to further loans being used to pay off the interest. Both economies are becoming ever more vulnerable to the dam bursting, during the next major recession.

With currencies closely tied to the dollar, and costly social programs, both nations face high real unemployment. Official statistics hide this. It is easy to disguise unemployment, when more and more youngsters become students and large sections of the workforce operate in the black economy.

As you drive down urban and rural streets in both countries you can see large numbers of idle people of working age, especially women. In Costa Rica, the scheduled regular changes of children’s school hours from early to late shifts, makes it impossible for many women to seek employment. Therefore, production is lower than it could be. That reduces the ability to reduce the debt mountain.

The other consequence of high social costs, expensive bureaucracy and currencies that are overvalued is that foreign firms can find lower cost countries in which to locate their businesses. With Trump’s push to repatriate offshore jobs, this will be worse. Also. his immigration policies will make it harder for Latin Americans to work in the US and send home much needed dollars.

Turning to tourism , in Costa Rica it is the number one industry. In Ecuador, it is the fourth largest. Both countries are over-exposed to risk due to encouraging more growth in tourism. Apart from their impact on habitat and the ecosystem, tourists are notoriously fickle. Terrorist attacks in Egypt, Tunisia and elsewhere caused an overnight collapse. Tourists can easily go elsewhere and during recessions they stay at home.

There are many things which can cause visitors to stay away. Our position in the Pacific Ring of Fire has occasionally closed our main airport. It could do much worse. A significant atrocity against visitors by gun crazy hoodlums or a series of smaller ones would be disastrous. Then there are perceived dangers from viruses, plus the view that neither country is a high value for money destination.

What of all the money brought in by expats? The problem here is that many retirees may put more strain on the economy than they contribute. This is certainly the case with Caja (social security)  in Costa Rica. Hip and joint replacements and other major surgeries and treatments may consume many years of their contributions.

The Caja Costarricesence de Seguro Social or Caja – system is already in crisis.

Economics is the dismal science. I have spread much doom and gloom here. Let us hope that the governments of Ecuador and Costa Rica find the wisdom and gumption to chart a route through these dangers. Do not hold your breath.

Meantime, wise expats keep much of their wealth outside Costa Rica and in hard currency. The value of property and the colon could easily drop by 30% when the dam bursts. That is what happened to property values in Ecuador as oil prices fell and why some expats have discovered that it now costs far less to buy a house there than in Costa Rica.

Chris Clarkehttp://www.penmanhouse.com/413894516
Chris Clarke writes thrillers under the name Aaron Aalborg and has retired to Costa Rica from New York and bought a house here 6 years ago. His career included international banking. He has degrees in economics and management. In earlier lives he was a Catholic trainee monk; a radical student activist, a Royal Marine Commando, a businessman, a partner in a consulting firm, a professor at a UK business school, an Investment banker and the CEO of a global executive search firm. He has lived in Europe, Asia, New York and Latin America.