With protests escalating in Ecuador, President Lenin Moreno has moved his administration out of the capital Quito to the port city of Guayaquil. Moreno claims his predecessor, Rafael Correa, is attempting a coup. 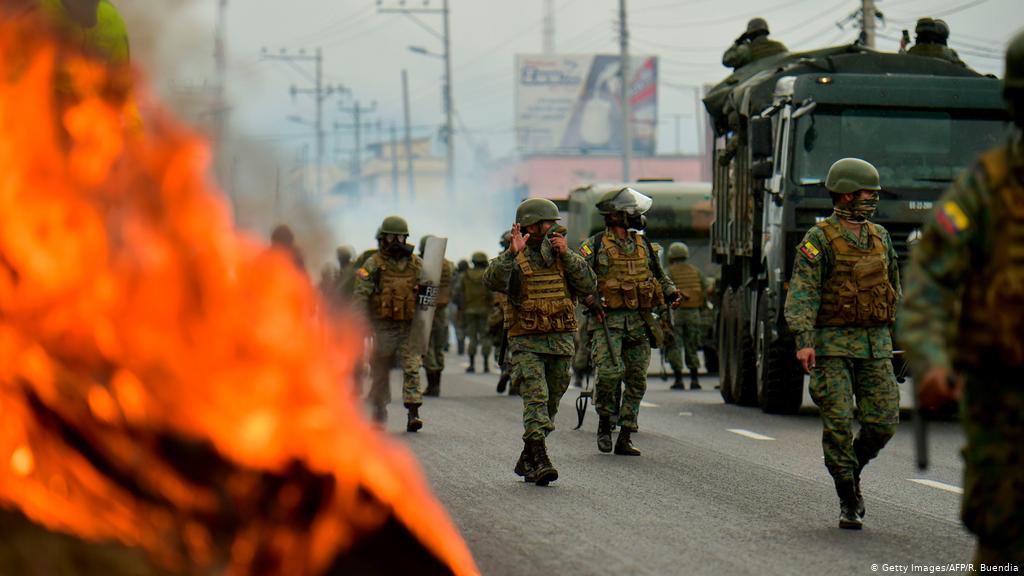 As thousands of anti-government protesters poured into Ecuador’s capital Quito, the nation’s president, Lenin Moreno, moved to the southern port city of Guayaquil and announced he was facing an attempted coup.

Members of the nation’s indigenous tribes traveled to the city for a march on the Quito presidential palace on Tuesday. Protesters braved police tear gas and some briefly broke into the empty congress building, while elsewhere roads were blocked and transport came to a halt.

Protesters seized two oil installations and state oil company Petroecuador warned that one-third of the country’s production could be lost if protests continue.

In other parts of the Andean country, protesters vandalized shops and vehicles during running street battles with riot police.

In a Monday evening address from Guayaquil, Moreno pledged to stick to the subsidies decision. Moreno also accused his exiled predecessor Rafael Correa of trying to oust him with help from Venezuela’s Nicolas Maduro.

“Maduro and Correa have begun their destabilization plan,” Moreno said, appearing together with his top military chiefs.

On Tuesday, his government said it would be open to mediation by the United Nation or the Catholic Church to overcome the crisis. Moreno’s secretary, Juan Roldan, also said that 570 people have been arrested due to the protests.

Talking to reporters in Belgium, Correa denied accusations that he was planning a coup and that he was in cahoots with Venezuela’s Maduro.

“They are such liars … They say I am so powerful that with an iPhone from Brussels I could lead the protests,” he told the Reuters news agency.

“People couldn’t take it anymore, that’s the reality,” he added.

Correa faces multiple charges in Ecuador, including corruption and abuse of power. He said he would only go back if there was a political shift in the country.

“I would have to be a candidate for something, for example, vice president,” he said.

Ecuador is facing an economic crisis and was forced to seek a $4.2-billion (€3.8 billion) loan from the International Monetary Fund (IMF) last year. The canceling of the fuel subsides plays a key role in complying with the IMF’s terms.

However, Moreno’s austerity program is unpopular among his voters, says Ximena Zapata of the Hamburg-based GIGA Institute for Latin American Studies.

“It punishes the poorest parts of the population and favors the small percentage of the wealthy, mostly private banks and businesspeople,” she told DW.