EDITORIAL: Please Somebody Tell Me What Today’s Protest is About 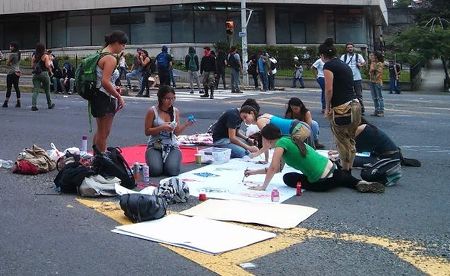 Since early this morning I have been watching the television news reports, the images of protesters blocking streets in many areas of the country, even forcing the golden geese (tourists) to grab their bags and walk to the airport.

In Puntarenas “tortuguismo” (slow down) shut down the Costanera. On the other side of the mountains, protesters completely closed off the port city of Limón.

In between, Heredia was a right-off, traffic was blocked from entering and leaving the Cuidad de las Flores. In Alajuela much of the same, as the General Cañas was chocked off at the toll station and hundreds littered the road leading to and from the airport and Alajuela.

In San Pedro university students blocked of the Circunvalación in the area of the University. In San José, protesters blocked Avenida Segunda and amasses in front of the legislative building.

In all of this I have been trying to make some sense of what the protest is all about. Some are protesting the San José – San Ramón road. Others (La Carpio) are upset about the sewage treatment planned in their community. University students had all kinds of causes to protest.

Well, as I sit to write this, I still don’t understand the objective of paralyxing different parts of the country. I get the feeling that most of the people out in protest don’t know either.

I have been in Costa Rica for some years and remember the days that protests were unheard of in the country. I remember it all started with the ICE COMBO protest a decade ago.

Since then I have been on the sidelines reporting on the protests. The protests of past always had something to say. This protest I cannot even come with a tagline.

What’s it all about? Please somebody explain it to me.