EDITORIAL: The Arayas and Second Round Vote 12 Years Apart 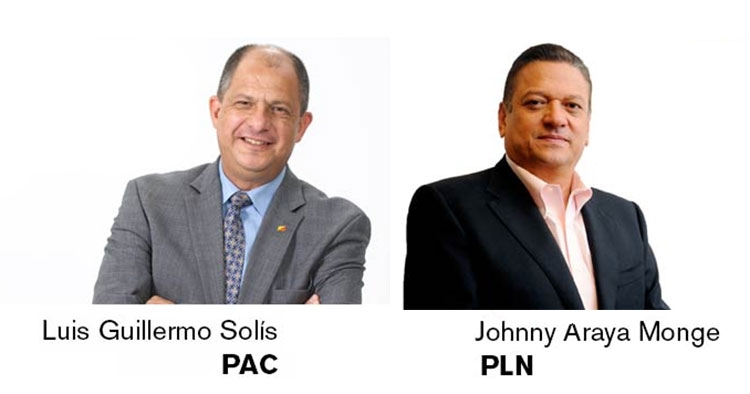 It was on a Sunday like today twelve years ago when some 2.2 million Costa Ricans, for the first time voted in a second round, since the founding of the Second Republic in 1949.

That day, on April 7, 2002, voters were asked to choose between Abel Pacheco of the Partido Unidad Social Cristiana (PUSC)  and Rolando Araya, of the Partido Liberación Nacional (PLN).

Today, 12 years later, some 3 million voters are again taking the presidential election to a second round vote and for the second time the PLN candidate is an Araya. In 2014, it is Johnny Araya, younger brother of Rolando.

The big difference, however, is that Johnny is not in the race. Technically his name is on the ballot and he could even be elected, but a month ago, on March 5, he threw in the towel, withdrawing from the presidential campaign, leaving the ruling party without a candidate to follow.

Another major difference is the way this day will written in history.

The 2014 presidential race that started six months ago has been nothing usual. Johnny Araya was the shoe-in, with more than 40% of the popular vote going into the official part of the campaign. The PLN candidate dropped almost half of the support in the first election campaign poll.

The small social and at times referred to as communist party, the Frente Amplio, led by José María Villalta, quickly took over first place. An Araya that was touted as the next president had to shift gears, making serious changes to his political team coming out of the Christmas break. From there it went all downhill for Araya, the Frente Amplio sending fear among many.

Rodolfo Piza of the PUSC faded away. The PUSC party was a political powerhouse that alternated power in Costa Rica for decades, but decimated with the corruption scandals of former presidents Miguel Angel Rodriguez and Rafael Angel Calderon. Luis Fishman, the “menos malo” (least bad) candidate tried to revive the party in 2006, but couldn’t overcome the growing “Arismo”, the re-election of Oscar Arias.

Four times at the through Otto Guevara of the Movimiento Libertario pounded the pavement, he could smell the change in the air, maybe 2014 was his year. He came in fourth, behind the Frente Amplio.

On election day, little known or heard of, former PLN party member. Luis Guillermo Solís, took the country by surprise, beating out Johnny Araya with just a little over 1% of the  popular vote. But the country was divided. On February 2 voters were split among the five top parties, leaving Solís short of the 40% required to be declared a winner.

On March 5, Araya surprised us even more, saying he would not continue with the campaign. Uh? Luis Antonio Sobrado, chief of the Tribunal Supremo de Elecciones (TSE), expalined there were no contingencies for this, the law is clear: a candidate may not resign, his or her name must continue on the ballot.

Was this a ploy by the political astute Araya, some asked? But the PLN candidate assured us it was not.

So, we are here today. Whatever the outcome, it will written in history, unlike any other election.

Here’s a little preview of what the history books may say:

Scenario 1: Luis Guillermo Solís wins, obtains the majority of votes and is declared president. The country will have elected the first PAC government. The two party rule in Costa Rica between the PLN and PUSC is no more.  In this scenario, Araya becomes a footnote.

Scenario 2: Solís loses.  Johnny Araya is elected as president and serves out his term, as he said he would. The withdrawal from the campaign is seen as a stroke of political genius, a calculated risk, reading the wave of the voters that it would serve him (Araya) better not to be seen in public, not to make promises and most important, not to have to face any scandals.

Looking ahead of what to expect during the next four years, in scenario 1,  business is expected to react with caution, possibly stagnating investment and growth. Solís faces many challenges, one being a minority position in the Legislative Assembly – making it difficult to push through PAC sponsored legislation, and two, if he does not obtain a respectable voter confidence, his legitimacy – though legal – of being president will be challenged constantly during his entire administration.

In the second scenario we are assuming that the votes weren’t for Araya, but rather against the PAC and Solís. Araya will be the president that nobody wanted – heck, not even he wanted the job. But the country is expected go on “business as usual”.

Whatever the outcome, the 2014 will not be easily forgotten.

TODAY NICARAGUA – The Observatorio Ciudadano (Citizen Observatory) report revealed this Friday, May 7, 878 new suspected cases of infection with the virus and...
Health

QCOSTARICA - At the beginning of this month of May, Costa Rica has applied almost a million vaccines, as announced by President Carlos Alvarado...
Today Costa Rica

LONELY PLANET - Costa Rica is famous for its lush coasts, biodiverse jungles, stunning waterfalls, and dramatic volcanoes – not to mention a mix...
Vaccine

TODAY NICARAGUA – A study based on data from the WHO and the University of Oxford placed Nicaragua as one of the “10 safest...
Health

QCOSTARICA - The Covid-19 infection rate in Costa Rica dropped, but not enough to reduce the rate of infection. While the indicator stands at 1.32,...