Eight Presidents Await Obama In The Most Violent Region

Front PageEditorialJournal
By Rico
2 May 2013 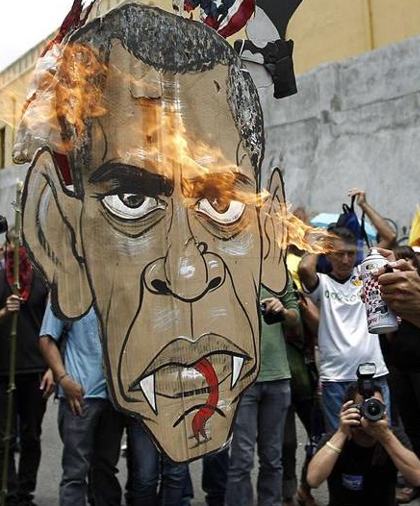 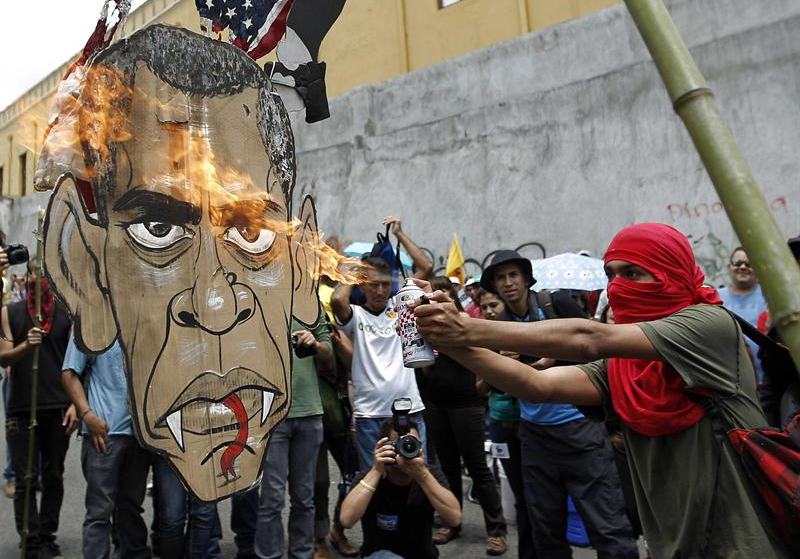 Protesters burn an image mockery of President Barack Obama on Wednesday May 1, 2013, during the International Labour Day in San José (Costa Rica). A confrontation between several dozen youths and police broke out in the area around the Legislature, where were inside were assembled all the deputies, in the traditional May 1 politica activities. Photo / Jeffrey Arguedas

In less than 24 hours U.S. President Barack Obama is set to arrive in Central America, one of the world’s most violent region because of drug trafficking, to meet with the eight presidents who are waiting with economic demands to support their fight against the drug trade and attention for the 5.3 million Central American migrants living in the United States.

Obama arrives in San José, Costa Rica, from Mexico, on Friday, May 3, where during his 22 hours in the country will be holding short meetings with the presidents of the region and attend the Sistema de la Integración Centroamericana (SICA) conference.

The White House announced that President Obama is keen to “strengthen cultural ties, and economic fraternity” with Mexico and Central American nations. The official report recognized that security issues will be included on the agenda for discussion.

According to the International Narcotics Control Board (INCB), attached to the United Nations, more than 70% of the 280 tons of cocaine flowing from South America to the United States passes through Central America.

In its report on the state of the war on drugs 2012, the INCB noted that in several Central American countries, the highest rates of homicides are linked “to organized crime and conflicts between criminal groups fighting for control of routes drug trafficking. ”

The countries most affected by violence and organized crime, according to various sources, are Honduras (92 homicides per 100,000 inhabitants) and El Salvador (69 per 100,000), although the region is plagued by the scourge of drug trafficking.

On a visit to Washington a few days ago, Salvadoran President Mauricio Funes, pointed out that the United States has paid just US$40 million of the US$360 ​​million it has pledged to the security strategy in Central America.

“All Central American presidents agree that while there is not a greater involvement of the main consumer of drugs, the fight against drug trafficking and organized crime is not enough to expected results,” said Funes.

From Managua, Nicaragua’s Daniel Ortega was more direct: “The U.S. is the largest recipient of drugs in the world, therefore, should provide more funds if you expect the Central governments can contain drug trafficking.”

A media release from Guatemala, meanwhile, indicated that Guatemalan President Otto Pérez, travels to San José with his intention to restate his controversial proposal to legalize the drug, which has not had much response in the region.

In addition to the issue of drug trafficking, the presidents could also discuss the American Immigration Reform, which is expected to benefit the 5.3 million Central Americans living in the United States.

According to official data, migrants to the region contributed over US$12.7 billion dollars in remittances in 2012, a record and equivalent to seven percent of gross domestic product (GDP) of the area.

The countries benefiting the most from the remittances is Guatemala, El Salvador and Honduras, according to official figures.

Remittances are considered a vital source for the fragile econonies of Central America, where it is estimated that nearly half of the population lives in poverty and 19% of them living in extreme poverty.

With notes by  Gabriela Selser (DPA)

Cell phones are a fully integrated part of our...
Politics