El Salvador Cracks Down on Death Squads From Police, Military 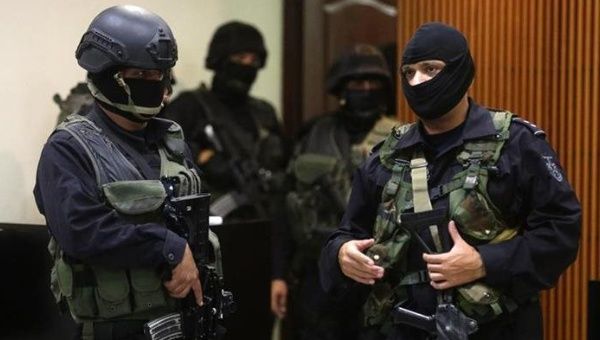 (Q24N) El Salvador’s authorities dismantled criminal “death squads” led by military and police members in the eastern part of the country linked to 36 murders perpetrated between 2014 and 2016, the office of the attorney general reported today.

According to Will Walter Ruiz, the head of the organized crime unit of the prosecutor’s office, 10 soldiers, 4 policemen – including senior officers – and some 34 civilians were arrested. Each had been involved in the formation of a network of death squads in eastern sectors of the Central American nation.

Ruiz said that the “social cleansing” group received funding from local businessmen, including a suspected drug smuggler, as well as Salvadorans in the United States. One of the suspected funders, known by the alias “Willy,” is wanted for human trafficking charges and is suspected to have fled to the United States.

He explained that the group consisted of two cells, one of which was originally dedicated to theft of banks and ATM machines and another devoted to the extermination of gang members from groups such as Barrio 18 and MS-13. Before long, the squads simply turned to generating revenue. Some of the group’s victims had no suspected gang ties whatsoever.

The anti-gang death squads have been involved in rumored “social cleansing” killing sprees since 2014. However, when gangs announced their intention to wage war on the security forces, the activities of the clandestine groups went unchecked.

El Salvador’s homicide rate improved slightly last year after rising to 100 killings per 100,000 residents. The raids have been seen as a needed move toward containing the problem of extrajudicial killings committed by personnel from state security forces.

QCOSTARICA - This week there could be very good news for the country in the fight against the coronavirus pandemic if the College of...
Infrastructure