El Salvador’s principal gangs — among them the Mara Salvatrucha and Barrio 18 — have called on the new administration to maintain the country’s gang truce, in what appears to be a last ditch effort to save both the pact and the benefits it has brought them. 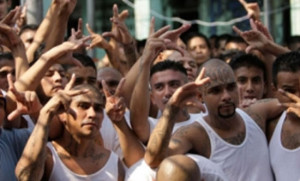 “The historic opportunity to recover peace that began on March 9, 2012 remains open; taking advantage of this to the country’s benefit depends on everyone,” gang leaders announced in a June 3 statement (see attached document). They highlighted their early and consistent support for the government of recently instated President Salvador Sanchez Ceren, and asked the administration, the church, civil society and businessmen to join them in this cause.

The gang spokespeople blamed rising violence in the past year on poor government policy — likely an implicit reference to the policies of Security Minister Ricardo Perdomo, a major truce critic.

Additionally, the gangs asked the new government to confront the “death squads” that had “recently taken the lives of many of our members, family members and civilians,” stating that some of these groups operated inside the state apparatus.

The gangs denied reports they had recently been enforcing curfews on the population, blaming these instead on people who wanted to justify the death squads’ actions.

The outgoing Salvadoran government was instrumental in facilitating the truce between the Mara Salvatrucha (MS13) and Barrio 18, but changed its rhetoric in mid-2013 — around the same time that dramatic security improvements began to reverse and homicides began to rise again. Security Minister Perdomo was one of the main protagonists in this, closing channels of communication between imprisoned gang members and claiming the gangs had used the truce to increase involvement in transnational drug trafficking. Shortly before leaving office, outgoing President Mauricio Funes announced the truce had “failed.”

With the most recent statement, it appears the gangs are attempting to appeal to the Sanchez Ceren government before the process can be shut down completely — which would lead to a loss of the political capital and other benefits the initiative gave them.

Meanwhile, the denial of forced gang curfews — which have been reported in various regions — could indicate that the central leadership’s control over their members is slipping, and that some local factions, or “cliques,” are acting without their knowledge or approval.

The mention of death squads is also of interest. There have been recent reports of a resurgence of La Sombra Negra — a death squad primarily active in the 1990s — as well as the emergence of other groups involving security forces. While the government has denied these reports, the gangs’ concern adds weight to fears the threat from the groups is real.