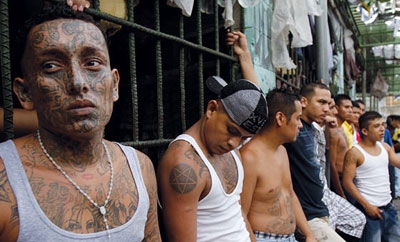 CENTRAL AMERIA NEWS (InsightCrime.org) Following the collapse of a controversial gang truce, El Salvador saw homicides spike by 57 percent in 2014. Now that the president has come out against reinstating the truce, the country faces a difficult way forward in terms of lowering violence.

According to figures from El Salvador’s national police, a total of 3,912 homicides were registered in 2014, 1,422 more than the previous year, reported La Prensa Grafica. It’s an extraordinary amount of homicides for a country of only 6.1 million.

According to President Salvador Sanchez Ceren, homicides began to drop in June 2014, the month he took office, and fell to an average of 9.3 a day in October before starting to climb again. December was a particularly bloody month, with at least 411 people murdered in the span of 31 days.

Mauricio Ramirez Landaverde, the director of the national police, reported that there were around 200 multiple homicides between January 1 and December 29, with the worst one claiming eight victims at a graduation party in November. According to the forensic institute, the overwhelming majority of homicides last year — around 78 percent — were committed using firearms.

Another notable characteristic of the violence in 2014 was the number of police officers killed. According to Ramirez, 39 police were murdered in 2014, and in at least 27 cases authorities were able to confirm that the officers had been targeted because they were police, reported El Mundo.

President Sanchez Ceren, Police Director Ramirez, and Justice and Security Minister Benito Lara all blamed the country’s gangs for last year’s violence. Ramirez stated that between January and November 2014, more than 1,500 criminals were the victims of homicides perpetrated by other criminals. He argued that the “overwhelming majority” of the 1,400 additional homicide victims seen in 2014 (in comparison to 2013) were gang members. For his part, Sanchez Ceren called territorial disputes between rival gangs the “principal homicide problem.”

Unfortunately, the violence doesn’t appear to be slowing down. In the first six days of 2015, El Salvador’s police registered 90 homicides, or an average of 15 a day, reported El Salvador.com. On January 6 alone, 19 people were killed.

A police officer was among the January victims. Although officials stated that it is not yet clear whether or not the officer was specifically targeted because of his job, there is evidence to suggest his death was a planned killing.

In his first public appearance of the new year, Sanchez Ceren squashed all hopes of the government facilitating another gang truce. In a statement on January 5, the president said the gang truce — which began in March 2012 under the administration of former President Mauricio Funes — had “allowed the gangs to grow and strengthen.” He stated that negotiating with the gangs was against the law and that the government’s obligation was to “go after them [and] punish them.”

While the truce was certainly fraught with problems, it may have been El Salvador’s best shot at dramatically lowering homicides in a short period of time. At the end of 2012, when the gang truce had been in place for nine months, the national police counted 2,576 murders, a 40 percent drop from the year before and the lowest number in almost 10 years. Homicides continued to fall in 2013, albeit far less dramatically, with a total of 2,513 recorded that year.

However, by the end of 2013, the truce had begun to fall apart. Critics argued that gangs had taken advantage of the relative peace to bolster their extortion and drug trade operations. In March 2014, as homicides climbed to an average of 8 per day, Rigoberto Pleites, the former director of the national police, stated that the truce “technically no longer exists”. By June 2014, murders were back up to pre-truce levels.

Now, according to statistics from forensics institute the IML, El Salvador’s violence has again reached a critical level. The IML’s estimate for El Salvador’s homicide rate is less than a point behind the 2011 rate, calculated by the United Nations Office on Drugs and Crimes at 69.2 per 100,000. If the IML’s numbers are correct, El Salvador has also surpassed Honduras as the most violent country in Central America (based on Honduras’ official 2014 murder rate).

Instead of supporting another gang truce, according to Lara, Salvadoran authorities are planning to initiate new anti-crime plans this year with the support of the community police force, which was launched in August. Although the government has not yet released specific details of the new plans, Sanchez Ceren stated that the community police have so far helped decrease extortion by winning the trust of local communities and prompting them to report crime.

Sanchez Ceren has also created a National Council for Citizen Security (CNSCC), made up of government officials and representatives from the Catholic Church and the civil sector, which has been tasked with developing an action plan to reduce violence and crime.

Although these are all welcome changes from the “iron fist” approach previously favored in the Northern Triangle region, they may not be enough to stem the violence. Estimates vary, but Pleites stated last year that the gangs were responsible for between 60 to 70 percent of the country’s murders, most of which he said resulted from disputes between rival groups. Unfortunately, the major spike in homicides following the dissolution of the gang truce indicates that the success of any security initiative may hinge on the gangs’ willingness to cooperate.

QCOSTARICA - If it seems better than expected, the ads for...
Read more

QCOSTRICA - In the last 72 hours, the country registers 33 new deaths from COVID-19, for a total of 1,641 deaths associated with the...
Read more
Front Page

QCOSTARICA - Costa Rica's new twenty rojos* bill was rolled out, circulating in the country on Thursday. And though they may be flashier, made...
Lighter Side

QCOSTARICA - If it seems better than expected, the ads for beach houses, with private pools, perfect for families who want to take a...
News

QCOSTARICA - Product of the joint work of the Ministry of Health (through the Health Governing Area of ​​La Cruz), Universidad Estatal a Distancia...