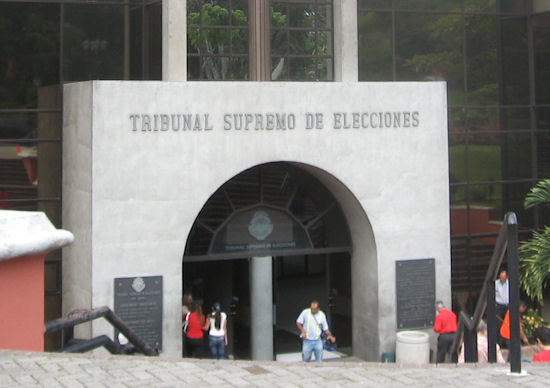 With the election less than a week away, minority candidates are unhappy about press coverage and have protested to the Supreme Elections Tribunal (TSE) that they can’t get their positions known to the public.

But the TSE, a body designed to guarantee a level playing field for even the smallest political party, finds itself in a legal bind: Although they serve a public function, news media are private businesses and are protected from government interference by freedom of the press statutes of the constitution.

Monday, Jose Manuel Echandi of the Partido Alianza Nacional, Walter Muñoz of the National Integration Party and Sergio Mena of Nueva Generación gathered at the TSE headquarters in east San Jose to protest what they call “inequity” in the campaign.

In fact, instead of running around feverishly shaking hands with strangers the way politicians are wont to do, they stayed on from 10 a.m. Monday. Mena told La Nacion that one could swear that there were only five candidates for President instead of 13.

Muñoz told the paper that the candidates intended to continue their vigil for 24 hours. On Jan. 9, the candidates presented a formal protest that was rejected by the Constitutional Court (Sala IV). So they resorted to the usual tactic of demonstrating their displeasure — although they did not block traffic to do it.

Meanwhile, in other election news, National Liberation candidate Johnny Araya appealed to his party’s faithful to turn out in mass at the polls to elect him in the first round. The latest Unimer poll commissioned by the national newspaper La Nacion has him losing to Libertarian candidate Otto Gevara if the election results in a runoff between Araya and Guevara.

Political observers noted that both Araya and Guevara have altered their strategy, Araya appealing more to his base. Guevara, responding to strength from the left, has been back-pedalling a bit in his Libertarian right wing economics. He recently reaffirmed his opposition to abortion, among other issues dear to Catholics and Evangelicals.

Recent campaign commercials have Guevara praising the Social Security system in an effort to assure voters that he would not junk universal health care nor the retirement system. Just as Broad Front party’s Jose Maria Villalta has to avoid an extremist stance on the left, Guevara has to assure coherence of institutions.

Finally, La Nacion reporter Mercedes Aguero asked, “What has happened to all the political flags?” By now in nearly every past election, flags have sprouted up in all neighborhoods. Today, green and white banners of Liberation or red and blue of the Social Christians are absent.

This reporter must admit until Aguero pointed it out, we overlooked the obvious. But teacher Ligia Mejia, 54, of Barrio Roosevelt in Limon told the reporter that she missed representatives of political parties coming to her door and asking to put up a brightly colored flag.

“It was like wearing a T-shirt for Alajuela or Saprissa, it was the pride of the family,” said Mejia in bewilderment. But it seems that parties are no longer investing in bunting to mark their territories. In fact, at only time, that was nearly the only campaign expense of a small party.

Ivonne Salazar, also a resident of Limon, pointed out that if political parties missed a house, residents would seek out the party to ask. The same happened with posters for candidates. But Salazar feels that people no longer have faith in their candidates and don’t care to be identified with them.

One aspect that has changed in recent years is a proliferation of debates. Repretel (Channel 6) will have the last one Tuesday, bringing to a close a numbing number of them. If a resident was really eager to be informed he had only to turn his TV set to a local channel in the evening, it seemed.

Personal Note: Years ago, someone asked a man carrying a bundle of flags of a small party, “You really don’t believe in those people, do you?”

The man dumped the flags into his pickup and said, “Not a chance. The old lady is going to sew them together for sheets…”