Q COSTA RICA  (by Mitzi Stark ) Watch out for electric cars. Although there are less than 100 in Costa Rica a spokesperson for one auto agency predicted that in ten years half the cars on the country’s roads will be electric.

Getting ready for the soon-to-come new cars, an electric cooperative in Bajo de Rodriguez, north of San Ramón has installed the first public electrolinera, or power station, which will charge up your car free any hour of the day or night. And if Bajo Rodriguez is a bit out of the way for most of us this is a prototype for the rest of the country. “In the future you will see them in places like hotels and vacation places and commercial centers. And maps will locate where to find one near your destination,” says Donald Hidalgo, electrician with Conelectricas, a consoritum of electric cooperatives. 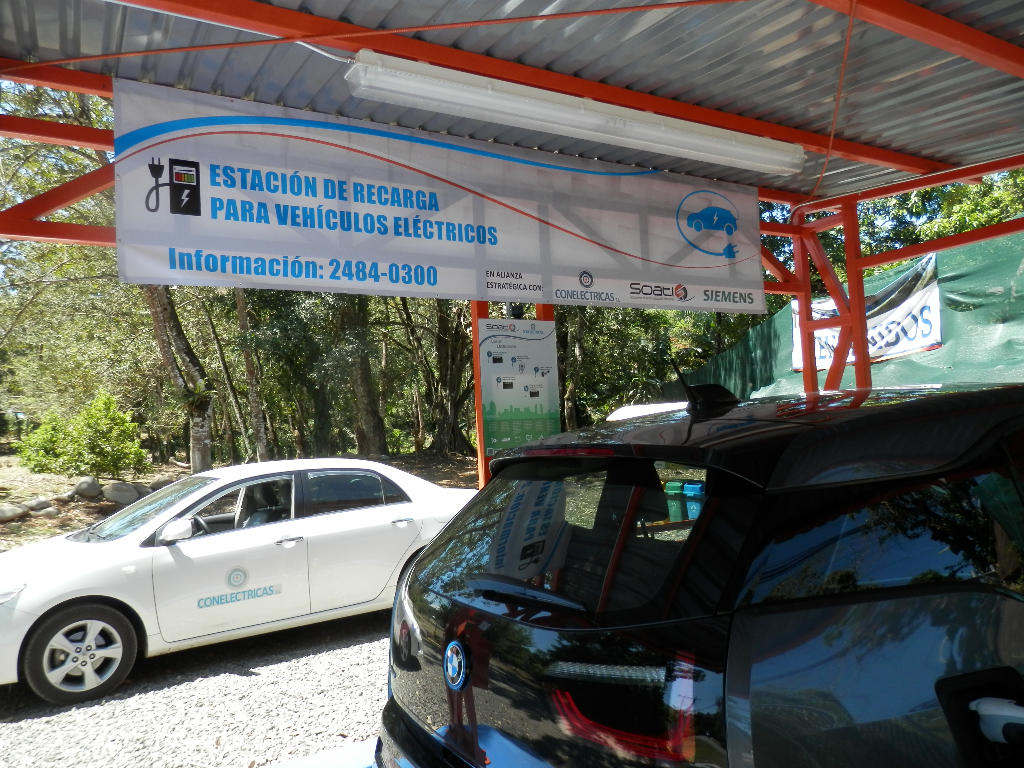 There are other electric filling stations in Costa Rica but they are part of the various electric providers, ICE, the national electricity Institute, and the Compania Nacional de Fuerza y Luz (CNFL) for government owned vehicles, although they too have plans to install more.

There aren’t many electric cars in Costa Rica’s northern zone, maybe three according to Hidalgo, but this is vacation country around La Fortuna and Arenal and the company expects to see many more in the future. 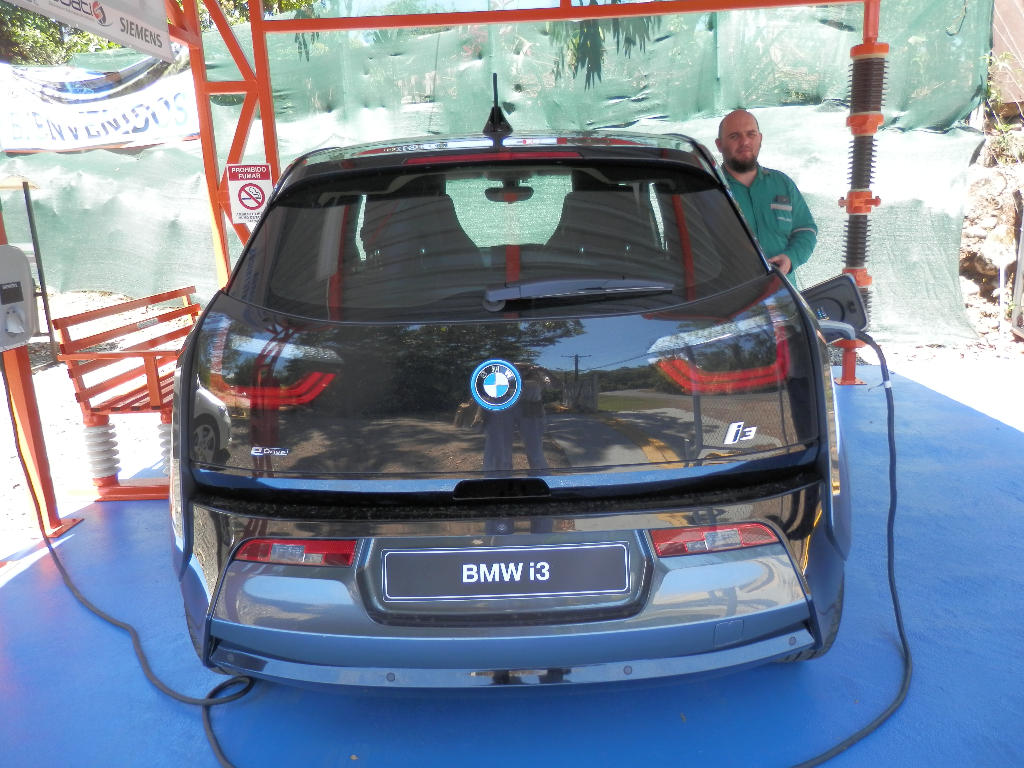 Driving an electric car is almost free as you can charge it up from your own home or from an electrolinera at very low cost, about a thousand colons, Hidalgo estimates.

A fully charged car can travel 200 kilometers on one charge. And while the car idles or runs downhill, the battery recharges. A panel on the dashboard will let you know how much electricity you still have. “But,” warns Hidalgo, “you have to remember to plug in your car just like your cell phone. If you run out of electricity on the highway, you have to get a tow truck.”

An electric car is simple, only 18 pieces, says Hidalgo.

The battery and motor basically. There is no radiator, no leaky oil to mess up your driveway, no spark plugs, no muffler, and no contaminating emissions and no repeat trips to Riteve. The ride is smooth and quiet yet the car can accelerate to 100 kilometers per hour in 100 meters in six seconds. The new cars are fully automatic but you never feel or hear the gears change. And “filling up your car” at an electrolinera is easy.

Five steps, fully illustrated for newcomers, show you how to push the button to release the connector and plug it into the car. Charging up a car is a slower process than filling up a gas tank but there’s no need to keep watch. The electric line will shut off when the car is fully charged. 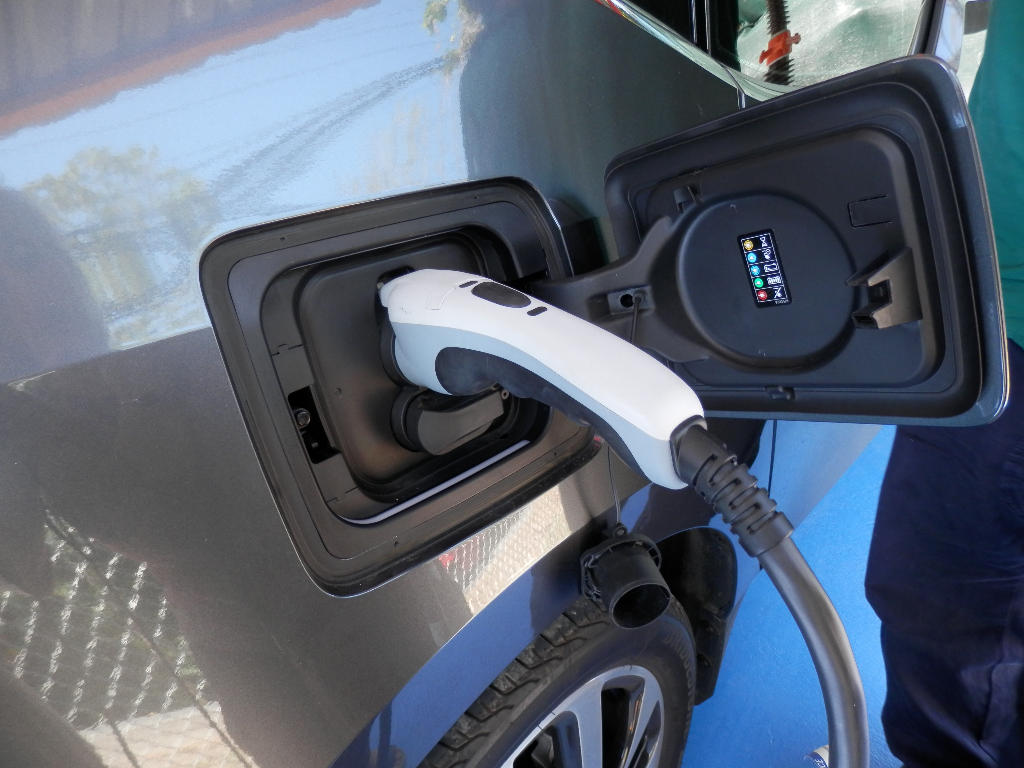 Or you can plug your car into an outlet at home using the special charger provided by the manufacturer. This takes about six to eight hours but can be done overnight without fear of overcharging. For now electric cars are on the expensive side but a proposal in the National Assembly, expediente 19.744, would exonerate electric cars from some of taxes and reduce prices about 15%. The government is promoting electric vehicles to reduce the contamination and the dependency on imported fuels. Prices are expected to come down as more electric cars are available. 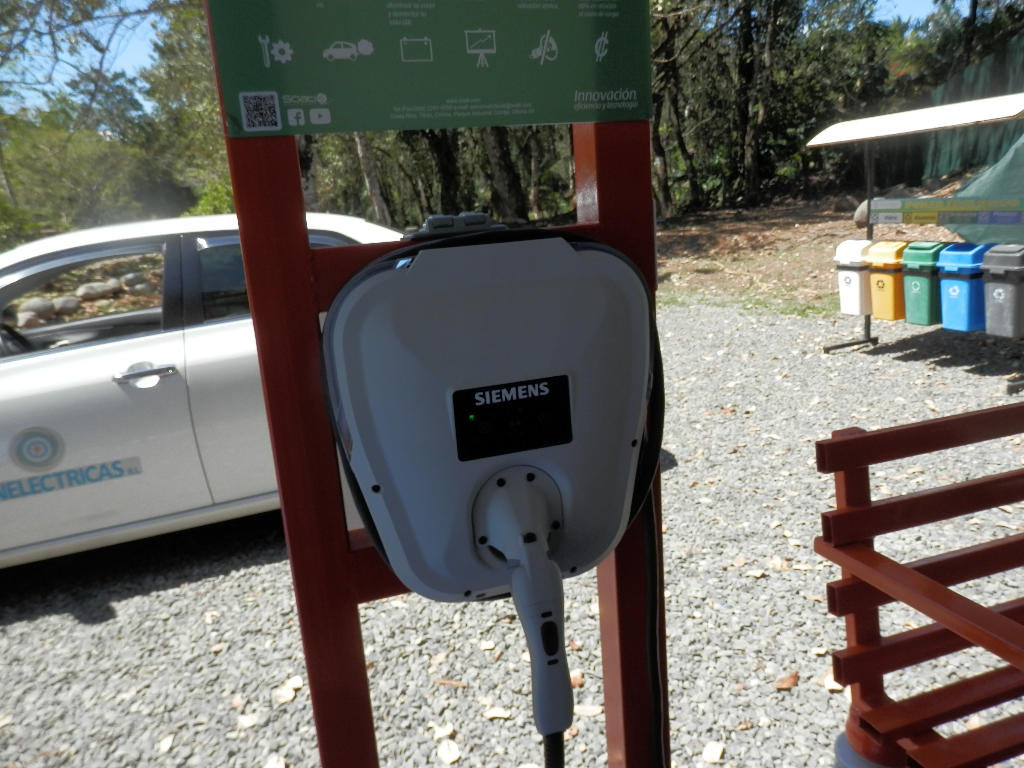 Another advantage is the guarantee. According to Hidalgo an electric cars will have eight year guarantees, and some, like Tesla, will be for the life of the car. If the battery does wear out, it’s a simple job to put in a new one.

BMW, Nisson, and Tesla, have demonstrator cars and are taking orders and Hyundai will have cars available in a few months.

Japan leads the world in electric cars and already has 40,000 charging stations. Costa Rica may be way behind but the future will see more electric cars, trucks and buses and, electric lines to service them.

Article and photos for the Q by Mary Ann Stark.

From Mary Ann Stark, “This was a great experience…the trip was lots of fun and  I  learned a lot.  A compañera from Grecia went with me.  Ishmael, in the photo, picked us up in a luxury electric beamer.  Donald Hidalgo, an electrician met us there and was a excellent teacher explaining so well how it all works.  (I had some stupid questions like can you wash an electric car?)  Then he drove us back to San Ramon and we stopped on the way at a cheese store.  This is around Ciudad Quesada, dairy country.  I bought lots of cheese.”

QCOSTARICA - They are known for their electric propulsion system, but...
Read more

QCOSTARICA - Can a US citizen travel to Costa...