If you, like many, have visited the Poas volcano crater in the last several decades, the image in your brain and constantly seen in photos, is no longer, after two ‘violent’ eruptions Sunday that completely destroyed the ‘volcanic dome‘.

The “domo” in Spanish, a wall 30 meters above the level of the Poas’ lagoon, formed in 1953 and could be seen from the lookout point to the volcano’s active crater, disappeared due to the eruptions of the last several days, confirmed the Red Sismológica Nacional (RSN) – National Seismological Network – of the Universidad de Costa Rica (UCR).

The eruptions that intensified since Wednesday’s eruption, first cracked the huge wall and then launched the rocks up to 2 kilometres away.

That is the explanation of volcanologists Mauricio Mora, of the RSN, and Javier Pacheco, of the Seismological and Volcanological Observatory of Costa Rica (Ovsicori) – Observatorio Sismológico y Vulcanológico de Costa Rica – of the Universidad Nacional (UNA)

According to Mora, that mass of magma formed into rocks from the 1950’s eruptions, was almost completely destroyed. The experts are emphatic that the rocks are old material and not new.

On the morning television news, Mora brought a sample of the rock, a piece broken off the original that was more than 1 meter (3 feet) in diameter.

The first lasted 10 minutes and generated a plume that rose 500 meters above the volcano’s crater; the second lasted a little longer and the plume reached 1,000 meters (one kilometer).

What’s can we expect from the Poas?

That is the question being asked today. But it’s anyone’s guess. What we do know is that in the last two weeks, since April 1, the Poas has produced such intense volcano activity that not even the Turrialba has in the last couple of years. 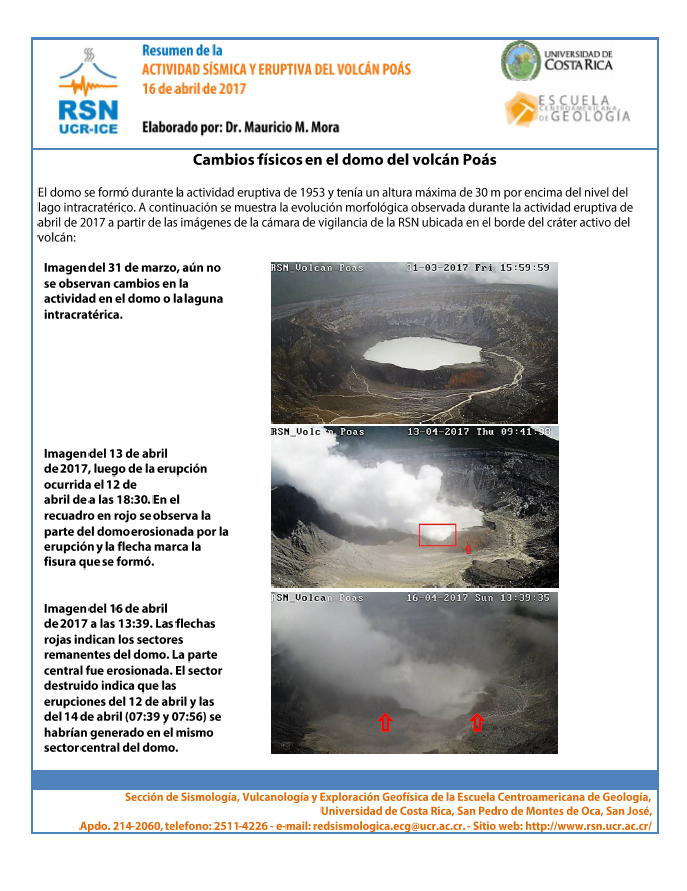