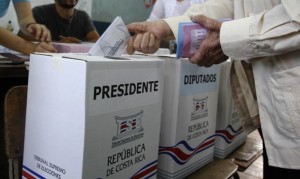 The TSE ruled that the ad, urging ALL Costa Ricans to think in a certain way – on “values and principals of the Bible” -violated both the voting laws and the constitutional guarantees of “libertad de cult”: (literally, freedom of religion.)

The suit was brought by lawyer Yashin Castrillo. The TSE ruled that it would have been all right for the Evangelical Alliance to urge its followers to follow such a past but the ad was directed flatly at all voters. Earlier in the cam[pain, TSE ordered two political parties to abandon the symbols they were using.

The ad specifically targeted gay marriage and abortions. “The message content,” read the court conclusion “surpassed characteristics of ‘freedom for religion’ and constitute a certain, real and immanent threat to the right to vote.”against

TSE ordered the Alliance to refrain from similar actions in the future and to pay costs and damages.

In other news, National Liberation Party candidate in the runoff election Johnny Araya received support from Evangelicals for his stand against abortion and same sex marriage.

The small Central American country of Costa Rica is known to be one of the top locations to retire, but it is also known...
News

HQ - The Fuerza Publica (National Pollice) intervened an agglomeration of people on the outskirts of the Rincón Grande de Pavas school during the...
Health

QCOSTARICA - Vaccination centers against covid-19 were transformed this Saturday to be able to vaccinate more people. Universities, civic centers, parking lots and even...
National

Today, Sunday, June 6, only ODDS can circulate. The measure is countrywide and applied between 5:00 am and 9:00 pm, save for those under...
Nicaragua