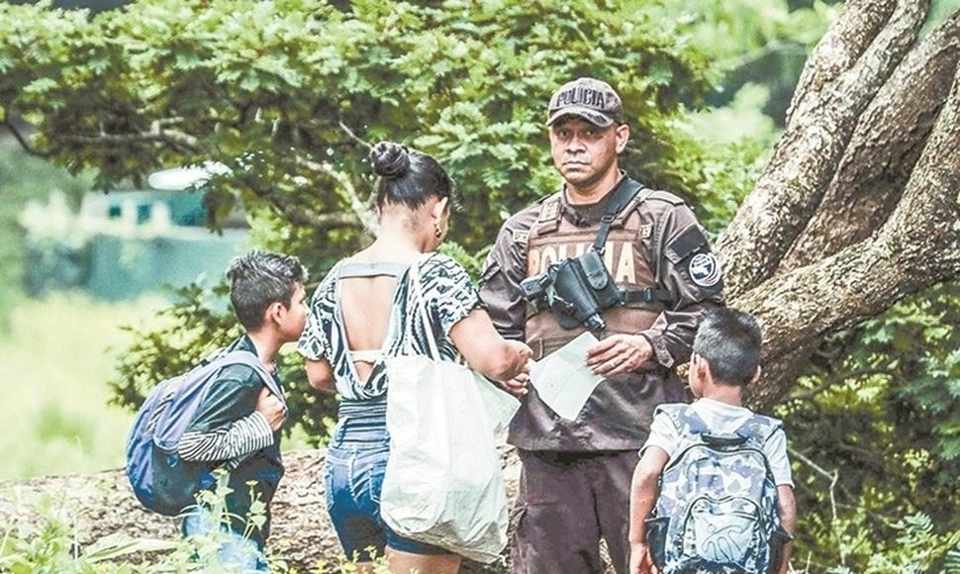 They fled. In six months of socio-political crisis in Nicaragua, more than 23,000 people have left the country because they believe their lives are in danger, after participating in anti-government protests.

At dawn on July 17, Álvaro Antonio Gómez, his wife, and two children were awakened by the sound of gunfire. They also heard voices, something distant.

That day in the Monimbó neighborhood in Masaya, masked armed civilians and police forces carried out the “clean-up operation” to tear down the barricades placed by the anti-government protesters on the main roads of the city.

As a result of the operation, there were four deaths, including a police officer, and at least 70 people arrested, according to information from human rights organizations.

Gomez and his family were forced to leave their home and take refuge in the homes of friends or relatives, to avoid the persecution that broke out in the neighborhood.

“That same day, family members helped us out of the city and we were hidden in the areas of the outskirts of Masaya,” Gómez recalls.

The man, 48, is the father of Álvaro Alfredo Gómez, one of the first victims of the repression of anti-government protests. The young man, who worked as a worker in a free zone and studied Finance, was shot in the chest on April 20 at a barricade in Monimbó. He was 23 years old.

Due to the siege suffered after the death of his son, and after the “clean-up operation”, the Gomez family considered that it was better to leave the country, and they chose to separate to facilitate the exit.

Álvaro and his wife stayed together, while their two children were received by friends to help them flee. The parents began to move from the city of Masaya to the border area with Costa Rica, supported by friends.

“We were like this from July 18 to August 4, when we managed to leave. Those days we spent hiding mainly from a visit that came to the house where we were staying,” says Gomez from exile.

He relates that he managed to enter Costa Rican territory by way of a blind point of the border, at about 8 on the night of  August 4.

“After crossing the ‘guardaraya’ (borderline) we walked about 500 meters until we reached a vehicle that took us to another point inside the Costa Rican mountain, where we slept that night,” said Gomez.

The couple’s children managed to leave the country legally, without any obstacle from the Nicaraguan authorities.

Gómez says that both he and his family began the process of refuge days after entering Costa Rican territory, as their case is analyzed by the Costa Rican authorities, but until today none of them are working; they receive the support of humanitarian organizations and other Nicaraguan migrants.

“My idea is not to make life in Costa Rica, I plan to return to Nicaragua whenever possible,” says Gómez.

Zambrana, who agreed to tell his story under the condition of not revealing where he is, states that after resigning from the television station on April 23 this year, he participated in anti-government protests and published on social networks aspects related to them, the reason he started receiving threats.

He affirms that many of those who poured insults against him were “old friends”, and as a security measure he chose to stop going out; However, as the tone of the threats became stronger, he began to weigh the possibility of leaving the country.

“I spent at least three months practically without leaving home. There came a point where the threats began to increase in intensity, so I looked for how to leave the country before having more complications,” says Zambrana.

Zambrana assures that he could leave Nicaragua without the immigration authorities restricthing his departure, but continues to receive threats through social networks.

Like Gómez and Zambrana, in the six months of political crisis, thousands of Nicaraguans have left the country to protect themselves from any repression for participating in protests.

Marlin Sierra, executive director of the Nicaraguan Center for Human Rights (Cenidh), explained that at first the movements of those fleeing took place inside the country, as a way of protection, but later a forced displacement abroad was necessary.

Watch the video by END (in Spanish)
[youtube https://www.youtube.com/watch?v=ovOremBaR1M]

He noted that between April and August, according to official data from the Costa Rican Department of Migration, between 23,000 and 25,000 Nicaraguans requested refuge in Costa Rica.

“The mass of migrants who are going abroad are mostly university students, that is, we speak of a generation with a high level of education,” said Sierra.

He added that many of these Nicaraguan exiles have had to leave the country through blind spots (in the border controls), becoming more vulnerable to threats such as human trafficking and sexual exploitation.

QCOSTARICA - Yes, it is possible to have security...
Business