Is Fabricio Alvarado behind the spreading of the false news? 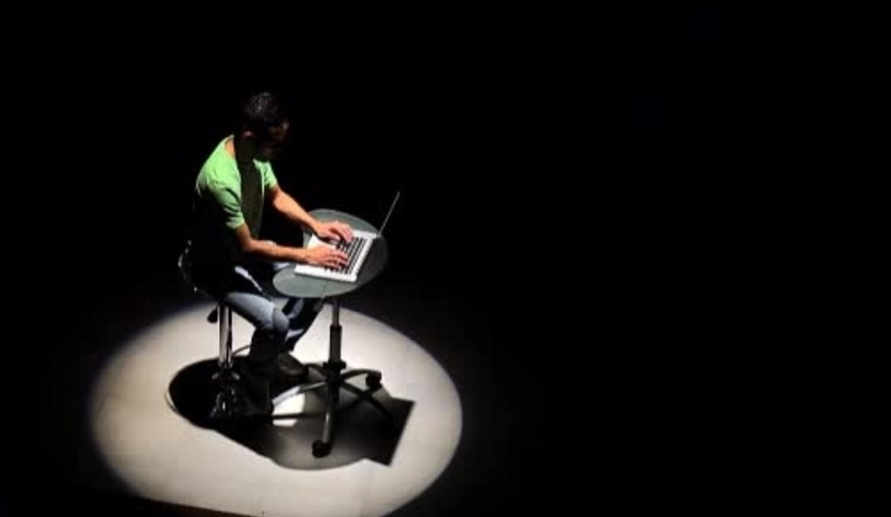 In less than 24 hours, at least six Facebook pages viralized the fake news about the Value Added Tax or IVA for the Spanish acronym.

Before that, the website Diaro La Carta, funded by Francisco Prendas, president of the Partido Nueva República, reported the government’s alleged decision to increase the IVA from 13% to 16%.

The information on the social media was also based on statements made by Prendas himself on his ‘Vecinos’ radio program, that broadcasts on Monday, from 8 to 9 am, on Radio Actual 107.1 FM.

However, Delgado clarified that he never confirmed the government’s alleged request to increase the IVA tax rate. But that didn’t stop the false posts and shared in bulk on several pages following Monday morning’s radio broadcast. 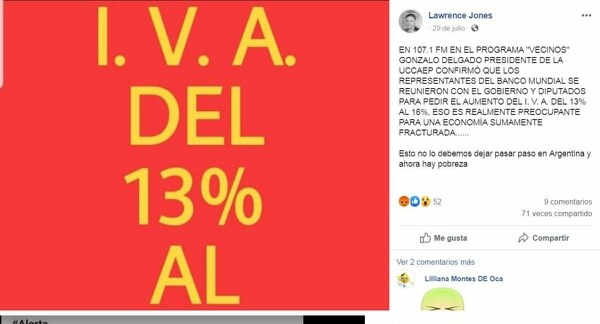 But it gets better. Many were quick to believe the reports given that the DiarioCarta.com, according to Godaddy.com Whois lookup, the domain is registered to Comunicaciones OBS, a company linked to Nueva República legislators Jonathan Prendas, confirmed the legislator himself in an interview with the Semanario Universidad, in June 2017.

His brother Francisco Prendeas admitted to AmeliaRueda.com that he finances the website, he described as “conservative, pro-life and anti-corruption”.

The Partido Nueva República was started on October 23, 2018, by Fabricio Alvarado after he resigned the Parido Restauracion Nacional, the party he headed into the 2018 Presidential elections, where he lost to Carlos Alvarado in the run-off vote.

Important to note that Fabricio’s campaign is under investigation by the Ministerio Público after the Tribunal Supremo de Elecciones reported that it had found three providers of services on the elections that had been paid by cash, something that is illegal in Costa Rica. 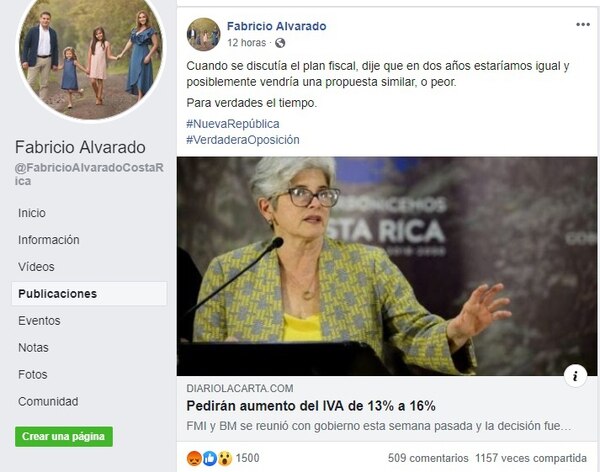 On his Facebook page, Fabricio writes, “Fake news? I do not think so”, blasting the media and influencers to “Once again (we already lost count) … to attack us, but this time with a new strategy”.

The question being asked by many this morning, did Fabricio Alvarado set up a means to spread false news?

Government ruled out an increase

The news that generated the controversy was an alleged government meeting, with representatives of the International Monetary Fund (IMF), to assess the possibility of increasing VAT to 16%.

The government of Carlos Alvarado ruled out, through the Ministry of Finance, an increase in the IVA.

Fake news is illegal in Costa Rica, but…

People who disseminate false information or fake news can be face up to 6 years in prison.

But cases like the DiairoCarta.com or the president of the Partido Nueva Republica no sanctions are contemplated, this because the penalty only applies when the false information implies a risk to the security and stability of the financial system.

There is currently a bill in the Legislative Assembly that seeks to impose sanctions on those who manufacture and disseminate false information in order to damage electoral processes.

Treasury launches a tool to facilitate the request for electronic invoices