Both victims died in hospital from severe burns. The elder was a traffic official. 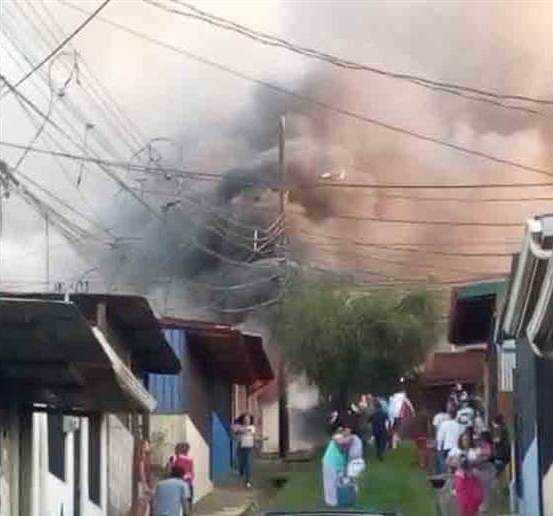 It took some time for the Bomberos (Fire Department) to control a fire started in a home garage in Coronado, where a father and son working on their vehicle died when a gas tank exploded.

The Bomberos confirmed that 120 square meter house was totally consumed by the flames and two neighboring homes suffering partial damages.

Residents tried to put out the fire, but the heat was so intense, their efforts failed. All they could do is pull out the victims and watch the flames devoured the home.

The Cruz Roja reporting that the 23-year-old Luis Salas suffered second and third degree burns all over his body, transferred to the Calderon Guardia hospital in critical condition.

His father, identified as 53-year-old Ramón Salas Monge, a traffic official, was taken to the same hospital. Paramedics said he suffered burns to 90% of this body.

Both died shortly after arrival at the medical center.

Apparently, the father and son were repairing one of the vehicles, possibly with a soldering machine after they had removed the gasoline tank which later, for reasons that authorities can only speculate, exploded.

The emergency was a multiple alarm, with fire units coming from Coronado, San Jose Central, Guadalupe and Pavas.

With the deaths Luis and Ramon, the tally for this year is 26, the highest figure in the last 12 years, according to the data of the Bomberos de Costa Rica.

“We are really alarmed since the figure almost doubled the total number of people who lost their lives in 2017 (when there were 14) as a result of fires,” said Hector Chaves, head of the Bomberos.

“Once again we insist that people take into account each of the recommendations we provide through different communication channels, especially for the season,” concluded Chaves.

- Advertisement -
Paying the bills
Previous articleMarchamo, Cash or Zero Interest Financing, What Is The Best?
Next articleAnd so the Americanization of Costa Rica continues

QCOSTARICA - A large fire in a plastics warehouse in Alajuela...
Read more

Behind the scenes of the Bomberos Challenge

For the past month, there are those who wait for Friday...
Read more

QCOSTARICA - For Thursday, On January 13, the Ministry...
Health