First Thing In The Morning NOT The Best Time To Drink Coffee; Says the Science

COSTA RICA EXTRA (FORBES) — Drinking a cup of coffee first thing in the morning blunts the energy-boosting effects of caffeine and may lead to increased tolerance of the stimulant. This counterintuitive fact is explained in engaging visual form by Ryoko Iwata, ”a Japanese coffee-lover living in Seattle” on her appropriately titled blog, I Love Coffee. 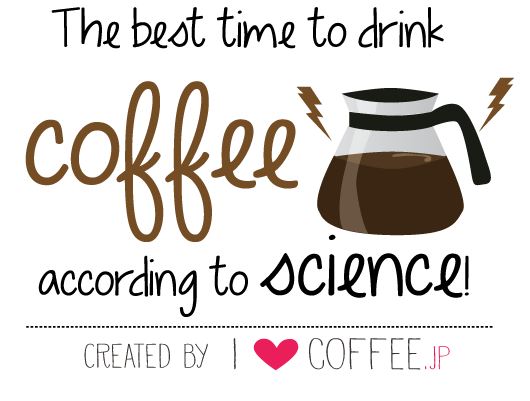 Iwata based her post on research gathered by Steven Miller, a Ph.D. candidate at the Uniformed Services University of the Health Sciences in Bethesda.

Scientists have worked out that the best time to get a daily hit of caffeine is on average between 9.30am and 11.30am.

This is due to the way caffeine interacts with a key hormone – called cortisol – which helps to regulate the body’s own internal clock and promotes alertness.

Here’s the thing. The peak production of cortisol occurs between 8–9 am (under normal circumstances.) This means that at the time that many people are having their first cup of coffee on the way to work, their bodies are actually “naturally caffeinating” the most effectively! According to Iwata, the effects of caffeine consumption at times of peak cortisol levels actually diminishes the effectiveness of the additional stimulation. Worse still, “By consuming caffeine when it is not needed, your body will build a faster tolerance to it, and the buzz you get will greatly diminish.”

Cortisol is also considered a stress-related hormone and consumption of caffeine has been shown to increase the production of cortisol when timed at periods of peak cortisol levels. An increased tolerance for caffeine can therefore lead to heightened cortisol levels which can disturb circadian rhythms and have other deleterious effects on your health.

Iwata, as her blog title suggests, loves coffee and has articulated what she considers to be the optimal timing of your coffee intake to experience maximum enjoyment with minimal negative effects. The times of peak cortisol levels in most people are between 8-9 am, 12-1 pm and 5:30-6:30 pm. Therefore, timing your “coffee breaks” (an apt term) between 9:30-11:30 and 1:30 and 5:00 takes advantage of the dips in your cortisol levels when you need a boost the most (see graphic by Iwata below.)

The best times to drink coffee are when your cortisol levels naturally dip. These are, in fact, traditional “coffee break” times.
Put this way, the traditional idea of a “coffee break” makes a lot of sense. I almost wonder if the the idea of having coffee first thing is a habit instilled by the coffee industry to get us to all drink more coffee! What Iwata’s chart does not take into account is coffee consumption by early risers before 8 am, when many of us have our first cups. This raises the question of whether to have three coffees a day (probably too much for most people) or to forgo one of the periods Miller’s research suggests. I will follow up with him and report back on his response.

Iwata’s delightful blog has other pleasures as well. There is a post about an app that simulates the audio ambience of a café for those who find it a productive work environment, a comparison of the beneficial attributes of beer vs. coffee (she likes both!) and a spot on assessment of what your coffee preference reveals about your personality. For now, my cortisol is kicking in but I’ll wait for later to have a second cup.

Article first appeared on Costa Rica Extra, reposted with permission. For more articles like this on food, drinks and more visit Costaricaextra.com

QCOSTARICA - It's five in the afternoon on any given Wednesday in San José. Hundreds of people returning to their homes begin to crowd...
HQ