From fun to mortal danger: just take a few steps to be left unprotected in La California neighborhood

Despite the police presence this Firday in the area of the 'action', people were exposed to the same outcome as Marco and Manfred when they said goodbye to the area. Sooner or later. 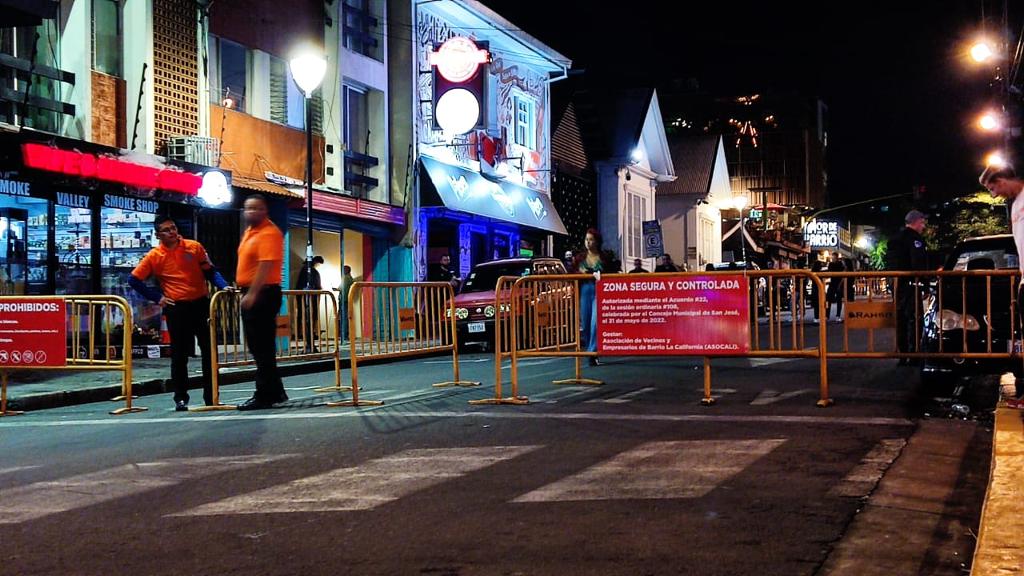 QCOSTARICA – This is not just any Friday in Barrio La California, known commonly as “La Cali”. It’s close to 10:00 pm and it is evident that the “nightlife” has not yet started.

At this point in the night the music barely heats up and the youngest arrive at the bars or those who have to get home early.

A security guard who works in one of the corner bars in this well-known neighborhood says that it will be until 12 midnight when the “the scene heats up”. You can already see some groups of friends, mostly young people, outside the businesses, waiting for it.

Meanwhile, it is impossible not to think that, while this Friday the party started again in this crowded entertainment sector in the capital, a week ago 19-year-old Marco Calzada also enjoyed the hubbub before it for home, walking just a few meters and being killed.

Marco’s death was not in vain. This Friday, unlike last Friday and the Fridays before that, there was a great police presence on this entertainment space and its surroundings.

Officers of the Fuerza Publica (National Police), Municipal Police and Traffic Police were present in the area of the entire sector, including the outskirts of the Magaly Cinema. Patrols were in pairs and in less than a block (100 meters in Costa Rica style of measurement) you could count up to a dozen police. Again, at a time when there are still no signs of a crowd, about two hours before it becomes a kind of fair.

But in addition, the Municipal Council of San José approved weeks ago to close the vehicular passage for the block of La California and turn the street into a boulevard. To enter you have to go through a security cordon, that includes a pat-down for possible drugs or weapons.

The security check is quick, a few seconds, five at the most with each person. When analyzing the scene one can only surmise a false sense of security, given that this is the only checkpoint, leaving tons of places unchecked where any substance or object can be perfectly hidden.

The director of the Municipal Police of San José, Marcelo Solano, explained to El Observador that this attempt to improve security is only for this month, after which they will analyze whether it makes sense to maintain it or even expand it to other sectors.

At the same time, he recognizes a personnel deficit for a task that would require more than the 535 officers of the municipal police force to monitor the capital city

Marco’s murder provoked a reaction in different sectors. Police chiefs will be held accountable in the Legislative Assembly, located only a few meters from where the crime occurred, while some police forces are beginning to devise strategies to deal with the large number of people who visit La California.

Meanwhile, the Minister of Security, Jorge Torres, spoke about the possibility of reducing the hours of operation of businesses, since he cannot assure the population that they will be safe in the wee hours of the night, as well as at another time of the day.

It is as if the security has given up and gave crime a time of day to operate.

Merchants have reacted annoyed against Torres and reminded him that security cannot be resolved by closing businesses, limiting trade, and reducing patrons. They ask him to do his job, that is, to offer the citizenry security.

Despite the great police deployment evident in the vicinity of the bars, where there is light, groups of people, food sales, the occasional dance in the middle of the street and a variety of businesses offering their services, just a few steps past all that, towards the outskirts of this sector, one notices the decrease in police surveillance.

Only a few steps away from hubhub you will find yourself in the darkness of the Parqye Nacional and the gloomy façade of the Estación del Atlántico train station.

The same darkness can be found walking along Cuesta de Moras, towards Plaza de la Democracia.

In fact, this is the option that Marco Calzada took, after crossing the vicinity of the Legislative Assembly and crossing Avenida Segunda, intercepted by his assassins.

They stabbed him to death and stole his cell phone to later sell it.

The previous Friday, June 24, a week before Marco’s death, another young man, Manfred Barberena, was attacked near the Cuesta de Moras bus stop. The attack occurred 50 meters from where this Friday there was a couple of armed police. Manfred later died in hospital a result of his wounds in the attack.

Walking around the outskirts of these neighborhoods, filled with youth, celebration and leisure, it becomes impossible not to think that just days ago Marco Calzada was part of this group of people who, naturally, wait for the weekend to meet up with their friends.

That Friday night, any of the people who passed through the area ran the same risk as Marco. A fate that could have befallen any one of them walking to or from a parking lot or bus stop to get to the action.

In the area surrounding the bars and restaurants, there are many dark areas and the infrastructure becomes an accomplice of criminals. In Marco’s case, he was intercepted between one of the sales kiosks and the businesses. Trapped.

This Friday, despite the police presence in the area of the ‘action’, people were exposed to the same outcome as Marco and Manfred when they said goodbye to the area. Sooner or later.

In the midst of darkness and loneliness, perhaps a security camera is watching them as they travel through downtown San José out of the police radar and the few lights illuminating.

17 cameras recorded Marco without this changing the fatal result.

The article by Josué Alvarado was translated and adapted from the original at Observador.cr.

QCOSTARICA - Once more a group of taxi drivers...
Politics