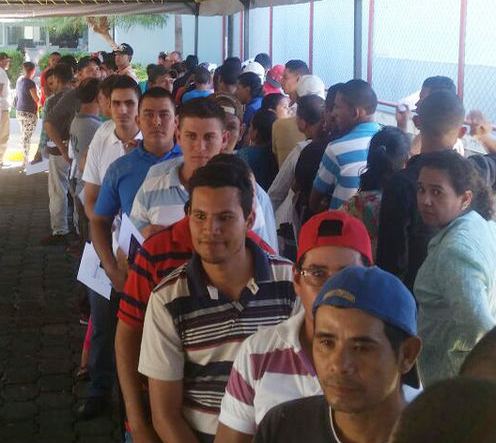 QCOSTARICA – Nicaraguans leaving home for Costa Rica to find work is nothing new. The migration has been ongoing for years, some arriving only during harvest season (coffee, melon, sugar cane), while others, though their plans are for a short stay, end up in the country for years.

The migration of Nicaraguans to Costa Rica traditionally has been a solitary one, generally men looking for work in construction and agriculture, women as domestics (maids). They leave families behind, sending money home. Over time, many are joined in Costa Rica by their families, relocating in the country.

Costa Rica authorities have detected an increase in the number of entire families now arriving in country looking for work.

“There is an unusual phenomenon this season. We see an increase of minors and entire families who come for the first time to Costa Rica,” said the Costa Rica’s ambassador to Nicaragua, Javier Sancho, who did not go into details.

He added that, in general terms, about 1,300 people daily are given visas in Managua and another 500 in Chinandega. Sancho said that the two consulates will remain open for the holiday season, save for December 25 and January 1, two public holidays in Costa Rica.

The wave of visa applications began mid-November and is expected to continue well into the January, when Nicaraguans return to their jobs in Costa Rica.

According to consulate figures, in the first half of this year, they issued 112,000 visas. The Foreign Ministry estimates that some 200,000 visas will have been issued by year’s end.

This article is from Nacion.com, with editing by the Q.