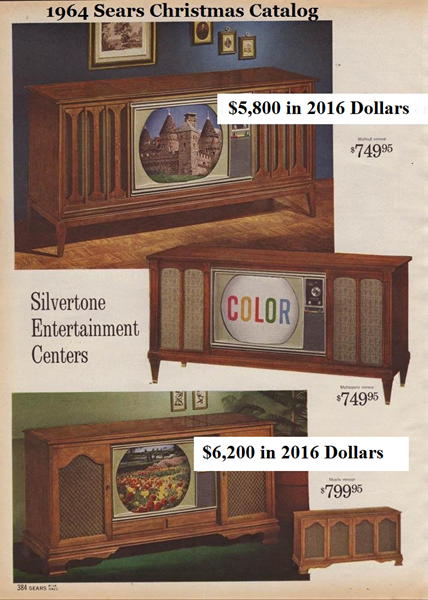 By Mark J. Perry – Pictured above are some color TVs from the 627-page 1964 Sears Christmas Catalog, from the Wishbook Web website (no longer available). The original prices are listed ($750 for the Sears Silvertone entertainment center and $800 for the more expensive one), and those prices are also shown converted to today’s 2016 dollars using the BLS Inflation Calculator: $5,800 for the basic 21-inch color TV model and $6,200 for the more expensive model.

To put that in perspective, the pictures below illustrate what about $5,800 in today’s dollars would buy in the today’s 2016 marketplace using current prices from the Sears and Best Buy websites:

For an American consumer or household spending $750 in 1964, they would have only been able to purchase the 21-inch color TV/entertainment center from the Sears Christmas catalog pictured above (includes phonograph and AM/FM radio).

Measured in terms of the “time cost” of purchasing household and electronic items working at the average wage, there’s a huge difference between 1964 and today. To purchase the $750 Sears TV in 1964 would have required 293 hours of work for the average American at the average hourly wage of $2.56 in November 1964 — that’s 7.33 weeks, or almost two full months of work to earn the income required to purchase the TV.

And isn’t it an amazing sign of the economic progress achieved over the last half century that even a billionaire in 1964 wouldn’t have been able to purchase most of the items above that even a teenager working at the minimum wage can afford today like a laptop computer, iPhone, iPod and Smart TV?

And because many of the low-cost manufactured goods we have access to today in the US — like TVs, laptops, and appliances — are manufactured or assembled overseas, where labor costs are cheaper, the powerful forces of international trade and global competition are an important part of the “magic of the global marketplace” and the “miracle of global manufacturing” illustrated above.

As Don Boudreaux pointed out recently, trade is simply the wonderful opportunity to take advantage of the “lowest-cost method of production” — and it doesn’t matter whether that production takes place on the same side, or the other side, of imaginary lines we call city, state and national borders vis-à-vis the location of the consumer:

…when consumers buy imports, they are simply choosing to make things for themselves and their families using the lowest-cost methods of production available to them: they ‘make’ their consumer goods using the roundabout method of working at their specialties and then transforming through trade some of their incomes into these goods. Sometimes consumers trade with fellow citizens; other times they trade with foreigners. But in all cases the trades are the lowest-cost methods of production available to consumers for provisioning themselves and their families with the goods and services that they desire. Why should the making of such choices ever be blocked?

Bottom Line: As much as we might hear people complain about a slow economic recovery, the lowest labor force participation rate in nearly 40 years, the decline of the middle class, stagnant median household income, and rising income inequality, we have a lot to be thankful for, and we’ve made a lot of economic progress in the last 52 years as the example above illustrates, thanks to the “magic of the global marketplace” and the “miracle of global manufacturing.” 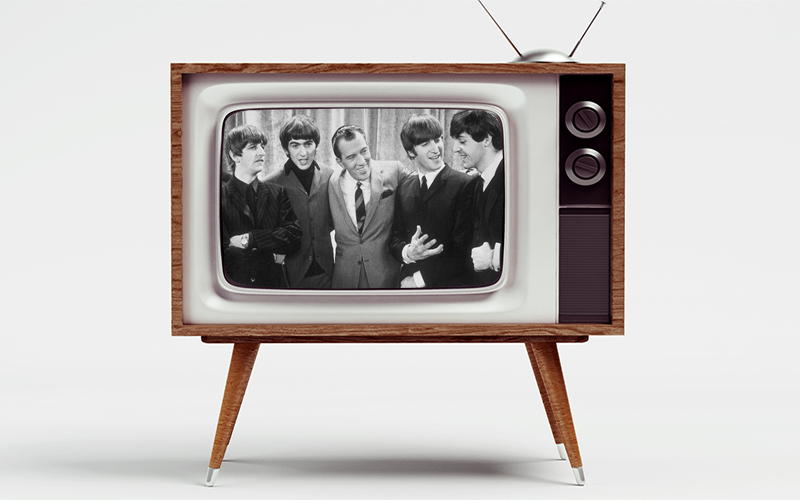 Looking forward, let’s hope that the economic progress we’ve experienced over the last half century continues, unimpeded by consumer-impoverishing trade policies that would prevent or restrict American consumers from having access to goods manufactured at the “lowest-cost method of production” – whether that’s across the street or on the other side of the world.

Mark J. Perry is a scholar at the American Enterprise Institute and a professor of economics and finance at the University of Michigan’s Flint campus. This article was originally published on FEE.org. Read the original article.