Government and Concessionaire Agree On Roadmap To Expand The Ruta 27

The 1970s design proved to be obsolete from opening day in 2010. Since there have been plans to widen the road.

Almost 10 years after the opening of Ruta 27, the highway that links San José with the Caldera port, the Government took this week the first step towards its expansion.

On Wednesday morning, at Casa Presidencial (Presidential House), the Ministry of Public Works and Transportation (MOPT) formalized a letter of understanding with Globalvia, the highway concessionaire, to carry out the expansion project.

MOPT minister, Rodolfo Méndez Mata, and the Deputy General Director of Globalvia, Carlos González Álvarez, signed a letter of understanding for the process of negotiating the studies that will allow the extension of the highway from La Sabana to Caldera.

The agreement extends the current concession contract that expires in 2033 for another 15 years; that would mean Globalvia would operate the national highway to 2048.

President Carlos Alvarado said that “we continue to build trust through agreements that allow for concrete works that are essential for the development of Costa Rica.” He added that “we believe in the model of the concession and therefore we have strengthened this process that
it will allow us to provide a solution to the collapse (congestion) of Ruta 27”.

“We considered and proposed to the concessionaire that we had to make some changes, if there is something that motivates a concession is that the amount of the rate that you get to pay, correlates it with the congestion problem has been solved,” said the secretary Consejo Nacional de Concesiones (CNC) – National of Concessions, José Manuel Sáenz.

Meanwhile, the Minister of Coordination with the Private Sector, Andre Garnier, stressed that after an exhaustive analysis, it was concluded that the solution to extend Ruta 27 is through an addendum to the concession contract with Globalvia.

The main works to be developed, if justified by the study of traffic and engineering, that is expected by the end of February of this year are:

Minister Garnier added that “What is clear is that definitely the process will lead to a review of the current tolls”.

For now, there is no indication of the estimate of what the increases would be or how much the Government would contribute to the project to not greatly impact the tolls.

Both Garnier and Sáenz guaranteed that the tolls that are going to be proposed (once all the costs are in) will be brought to the public’s attention for input, and before the extension contract or addendum is sent to the Comptroller’s office for approval, which is expected by June of this year.

Initially, the Government estimated that the expansion project would cost US$600 million dollars, however, it could be less.

History of the Ruta al Pacifico 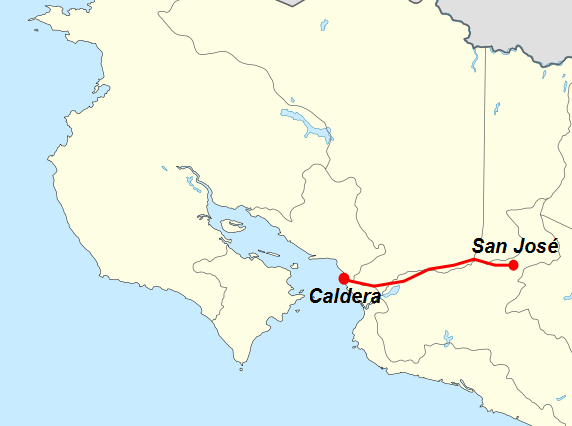 The Ruta 27, whose official name is Carretera Nacional José María Castro Madriz, was inaugurated by then-President Oscar Arias on January 27, 2010.

The road, also known as Autopista San José-Caldera, that connects the Greater Metropolitan Area to Caldera Port and the Pacific coast of the country, officially opened to the public until June of that year.

The idea of a road to the Pacific began in the mid-1970s, when the José Figueres Ferrer administration decided to relocate the main Pacific port from Puntarenas to Caldera, making it evident that with a new highway connecting Ciudad Colón with Orotina, the new port would be only 80 km from San José, just an hour away.

A preliminary design was drafted along the left (south) margin of the Virilla River (crossing towns such as El Rodeo, Piedras Negras, and San Pablo de Turrubares) that seemed the most economical, passing through low-cost uncultivated lands. But over time the elected design was along the right (north) margin of the river (La Guácima, Turrúcares, Concepción), which had more expensive lands for expropriation.

The financial crisis in the early 1980s prevented further progress. However, in 1986, the first government of Óscar Arias (1986-1990) obtained a US$40 million loan from the Inter-American Development Bank (IDB) to build the new road, although that administration finished without the loan being used.

The same happened during the administration of Rafael Ángel Calderón Fournier (1990-1994). The IDB withdrew the loan. The country uselessly paid US$3 million in interest.

At the end of the 1990s, without available financing, a private concession was considered, but it was necessary for the government to acquire more than half of the required lands, an opportunity that the landowners took in their advantage to inflate the prices.

In total, it took about twenty years to acquire the land for this work of public interest. Several major bridges were constructed in 1997 with US$25 million borrowed from Venezuela. They were completed and inaugurated in the administration of Miguel Ángel Rodríguez (1998-2002), and the road, which did not yet exist, was also inaugurated and named.

The project was tendered for a concession by the administration of Abel Pacheco (2002-2006) in 2004, and only one bid was received, from the Argentine company José Cartellone, which soon went bankrupt. Cartellone tried to give the contract to Lavalin of Canada, but a year later withdrew claiming that the right of way was not yet available.

The second administration of Óscar Arias (2006-2010) directly negotiated a concession with the Spanish company Autopistas del Valle, a winner of the San José-San Ramón highway since 2005, but it did not obtain immediate financing.

Finally, a sister consortium of Autopistas del Valle, called Autopistas del Sol, was hired to build Ciudad Colón-Orotina and also improve La Sabana-Ciudad Colón and Orotina-Caldera, which was already built, and raised the cost to US$120 million.

Autopistas del Sol claimed that the road would cost 3 times more (US$370 million) than budgeted. The road infrastructure was mostly completed until almost five years after initial works, without penalizing the delay.

The same road designs of 30 years before, already obsolete by then, were used because changing them involved a larger budget in works and expropriations.

In 2020, the highway was finally delivered and managed by Autopistas del Sol with a public works concession contract (Law 7762 of Costa Rica) for its maintenance, for a period of 25 years.

In March 2014 Autopistas del Sol sold most of its shares to the Spanish company Globalvía Infraestructuras S.A., assuming control of the concession.

As the 1970s design proved to be obsolete from opening day, there have been plans to widen the road.

HQ - The tolls on Ruta 27 increased in price since...
Read more

QCOSTARICA - Guanacaste has everything to be a prosperous...
National