Government Delays Construction but Not Does Not Back Down on Concession

The Miniter of Transport, Pedro Castro, met with the mayors of seven municipalities in the province of Alajuela on Friday, to discuss the concession contract for the San José- San Ramón road. 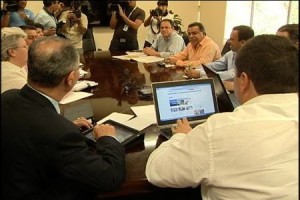 Following some eight hours of discussion, the government agreed to extend the timetable for the start of construction. The project was to get off the ground in five months, but now it may be delayed several months to allow a renegotiation of the contract.

Castro said he has not given the order to start the work and will not do so until the conclusion of a review of all the criteria.

Roberto Thompson, the mayor of the municipality of Alajuela, said “regardless of the delay, the work should not start as long as there are doubts.”

“We want the road”, indicated the Mayela Mora, the mayor of San Ramón. Mora, however, maintains firm that there are concerns to be addressed.

The meeting ended with an agreement between the Cental Government and the local municipalities of San Ramon, Zarcero, Naranjo, Grecia, Alajuela, Palmares and Valverde Vega, not to restrict the concessionaire, the Brazilian company OAS,  to work on plans, expropriation and environmental permits.

The agreement, however, does allow each municipality to reserve the right to deviate from the final decisions, if “their” objectivesare not met.

TODAY COSTA RICA - Before the Office of the Comptroller General (CGR), the rate agreed by the Municipality of the canton of San Carlos...
Vaccine

QCOSTARICA - The Ministry of Health authorized the use of AstraZeneca's Covid-19 vaccine on Friday, based on the conditional marketing authorization of the European...
Economy

(BNamericas) - In order to strengthen the well-being of the population and the sustainable development of the country, Costa Rica has been incorporated a...
HQ

QCOSTARICA - A 30-year-old man, who posed as a dentist, set up an office in the garage of a house in Siquirres, Limón, where...
Central America

Q24n - Central American countries presented a plan on Monday in the face of a possible migratory wave of Haitians, Cubans, Asians and Africans...
Politics

QCOSTARICA - Searching for a consensus candidate in the Partido Liberación Nacional (PLN) for the 2022 presidential elections, is the intention of two-time former...
Infrastructure

QCOSTARICA - Driving the 50-kilometer concrete highway between Cañas-Liberia, inaugurated five years ago and already showing signs of deterioration, is now free of tolls. But...
Travel

QCOSTARICA - Need to leave the country and require a test to detect SARS-CoV-2, the coronavirus that causes covid-19? The Cámara Costarricense de la Salud...
Political Economy

QCOSTARICA - The restrictions for travelers imposed by the United States, Canada, Mexico, France, Spain and the United Kingdom, six of the main sources...