Former Guatemala President Alfonso Portillo has pleaded guilty to charges of accepting bribes and money laundering before a New York court, a turn of events that could spell trouble for corrupt Guatemalan elites accustomed to enjoying impunity for their crimes. 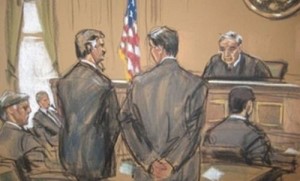 On March 18, Portillo — who led Guatemala from 2000 to 2004 — admitted in Federal District Court in Manhattan to accepting $2.5 million in bribes from Taiwanese officials in exchange for diplomatic recognition, reported Prensa Libre.

Portillo said he accepted the bribes between December 1999 and August 2002, transferring the money to US bank accounts in Miami and Washington DC through Guatemalan banks. “I knew that what I was doing was wrong and I’m sorry for my crimes, I take responsibility for them and I accept the consequences of my actions,” Portillo stated in court.

The admission is apparently the result of a plea bargain, the terms of which remain unclear. Portillo is expected to receive a prison sentence of four to six years and will likely be deported back to Guatemala following the completion of his sentence. Sentencing is scheduled for June 23.

Portillo’s admission of guilt follows a long saga in which he has previously avoided prosecution and conviction. He first fled to Mexico in 2004 to escape charges in Guatemala, only to be extradited back in 2008. Although freed on bail, the United Nations’ International Commission against Impunity in Guatemala (CICIG) began building a case against Portillo and he was arrested again in 2010 as he attempted to board a boat and flee the country.

However, despite strong evidence that he stole $15 million from the Defense Ministry during his presidency, he was acquitted in May 2011. Nevertheless, a Guatemalan court ruled in November 2011 that he should be extradited to the US to face further charges, and Portillo arrived there in May 2013.

Portillo’s acquittal in Guatemala was seen as a huge failure of the CICIG and Guatemala’s justice system, yet his admission of guilt and prosecution in the United States will now have many among Guatemala’s elites looking over their shoulders.

While the details of Portillo’s deal with US prosecutors remains unknown, it is possible it involves providing evidence about criminal networks within the government and upper echelons of Guatemalan society. Among them may be the Illegal Clandestine Security Apparatuses (CIACS) — networks built around the country’s intelligence apparatus during the 30 year civil war that ended in 1996, which subsequently established themselves as a powerful criminal presence.

QCOSTARICA - Costa Rica received this Sunday morning, June 6, the second direct shipment from AstraZeneca of vaccines against covid-19. The flight landed at 11:05...
Trends