He Survived 2 Murder Attempts in One Day 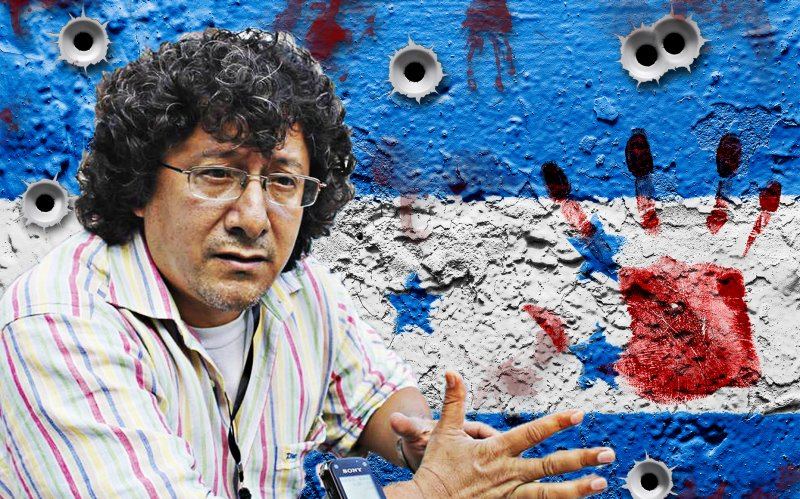 (Q24N) TEGUCIGALPA, Honduras — Two days in a hospital bed, recovering from painful gunshot wounds in either leg, have given ample time for the renowned Honduran radio journalist Félix Molina to reflect.

Strange as it may seem now, dressed in a hospital gown, with a policeman standing guard outside the door, Molina recalled how this week had begun with a new infusion of hope.

On Monday morning, four men were arrested for the murder of Molina’s friend and colleague, the distinguished environmental and indigenous-rights activist Berta Cáceres. Three of the suspects in custody were officers in the Armed Forces of Honduras. The fourth was an executive with Desarrollos Energéticos (DESA), the construction firm embroiled in a land dispute with the indigenous Lenca people over a hydroelectric dam proposal that Cáceres had given her life fighting to prevent.

“For me, there was a feeling of optimism,” Molina said. “The pressure was building for results in the criminal investigation, and for the first time there was a sense that whoever did this would be punished, regardless of their rank or affiliation.”

That pleasant feeling was brief, however, and ended with two attempts on his life on the same day.

Molina has been well-known among the human rights advocates in Tegucigalpa for 20 years, but it was his courageous reporting after the military coup of 2009 that cemented his reputation nationally.

In the early morning of June 28 of that year, the military rousted then-President Manuel Zelaya from slumber in his pajamas and put him on a jet to Costa Rica. The next day, Molina founded a daily program on Radio Globo whose ethos was to defy the siege mentality that the coup had imposed over the traditional media outlets.

Molina broadcast daily investigative reports and interviews with anti-coup organizers at the grassroots level, often traveling to the most far-flung corners of Honduras to do so. He called the program, simply, Resistencia. The North American Congress on Latin America awarded Molina the 2012 Samuel Chavkin Prize for Integrity in Ibero-American Journalism.

More recently, Molina has been producing two radio programs in Tegucigalpa and is a spokesman for an association that installs radio frequencies in rural communities in Honduras. He and the group, the Community Media Association, are lobbying the Honduran Congress to make it less burdensome for community radio stations, many of which are located on indigenous ancestral lands, to apply for a legal license to operate.

At 7:38 a.m. on Monday, after news broke of the arrests in the Cáceres case, Molina took to social media to repost a sensitive document in his possession disclosing to his nearly 1,000 followers the names of DESA’s prime investors and corporate officers.

It was information that Molina had revealed for the first time on March 8, within days of Cáceres’s murder. The names on the list had until remained a secret until then, despite Cáceres’s own repeated attempts to obtain them before her death.

“My mother tried publicly on repeated occasions to obtain that information of who the investors were, and she never did,” said Olivia Márcela Zúniga Cáceres, the eldest daughter of the slain activist leader. “I don’t know who [Molina’s] sources were, but he revealed who was behind the project.”

It was the start of a busy morning on social media for Molina. He followed his initial post with another that linked to a receipt of a $24.4 million loan to DESA from the Central American Bank of Economic Integration (BCIE).

“DESA is building the Agua Zarca dam on the Gualcarque River with financing from the BCIE, the Finland Fund, and the Dutch development bank FMO,” he wrote. He also singled out the Atala family, prominent in the Honduran banking industry, as the primary movers behind DESA.

Not yet finished, at 9:09 a.m.—three hours until the first attempt on his life that day—Molina pointed out a likely conflict of interest for the public official ultimately responsible for the Cáceres murder investigation: The current minister of security of Honduras, Gen. Julián Pacheco, is related to one of DESA’s top corporate officers. Also, DESA’s president, Roberto David Castillo Mejía, is a nephew of the long-serving congressman from the ruling National Party in La Ceiba, Rodolfo Irías Navas.

Molina cited as his source for these accusations an as-yet-unreleased police report from the Cáceres investigation. This mention was, in effect, a teaser. “I had gotten permission and was going to publish the police report the next day, May 3,” he said from his hospital bed.

All the while he published the inflammatory statements, Molina was online messaging with Zúniga Cáceres, who had agreed to appear on Molina’s radio program to share her reaction to the arrests.

She mentioned to Molina that his posts on social media were worrying her.

“He has always been very aggressive in denouncing corruption, in naming names,” Zúniga Cáceres said. “I told him to be careful, that it was dangerous what he was saying. One imagines there are limits to what these people are capable of. But they have no scruples whatsoever.”

At 12:40 p.m., Molina was in a taxi in Colonia Alameda, rushing to the radio station for his 1 p.m. program. The withering heat of the capital had him feeling slightly listless in the back seat; he barely registered when a couple, a young man and woman, pulled beside him on a motor scooter.

The woman slipped off the bike and pointed a gun at his head, demanding his cellphone. The man behind her on the bike shouted for her to shoot. The taxi driver reacted quickly, however, peeling out of traffic and averting the robbery.

“Ufff, what a country we live in!” Molina wrote of the incident.

Six hours later, at 6:40 p.m., Molina was robbed again, and he recognized one of the assailants as the man from the motor scooter at noon.

“This person recognized me and headed straight for me in the taxi,” he told The Daily Beast. “What bothers me is that they chose me out of a many possible victims in private vehicles and taxis at a busy intersection. And when I saw him approach, I looked over at him and he said something very intimidating. He said, ‘This time you won’t get away.’”

Again, as in the previous attempt, the assailants demanded Molina’s cellphone.

“I hesitated, then handed him the phone, and the second person shot me simultaneously,” he said.

Molina isn’t sure if he was shot twice, once in the upper thigh of each leg, or if one bullet passed through both legs. Fortunately for him, the projectile didn’t strike the femur or sever the femoral artery, which would have been deadly. Molina’s doctors expect him to make a full recovery, and to begin walking again within a few days.

The pain in his legs, however, is constant, and Molina frequently adjusted himself in bed and grimaced as he spoke.

“It’s not a simple matter for me to sit here and conjecture that I was attacked as a consequence of my work. But it would be irresponsible of me to rule it out,” he said.

“What to me is clear is that one of the assailants from the attempt at noon was the same who took part in the shooting in the evening,” he added. “That person recognized me and headed directly for the taxi I was in.”

The police assigned to Molina’s case say a street gang operates on the corner where Molina was robbed, an area that is poorly lit and where police presence is scarce. As a conscientious journalist, Molina is cautious not to speculate on motives.

“What I can assure you is that the people who did this had the skill to commit this type of crime. What I mean is, these were not amateurs or kids, victims of poverty who rob for survival.”

Whatever the motive, Molina said, “There is a structure parallel to the state that has logistics and intelligence, and operates with impunity. It’s safe to suppose the structure is made up of persons who have no regard for the institutions of the state, either because the state is weak or they’re accomplices or direct perpetrators.

“The impression I have, without speculating as to who is responsible, is that the purpose was to bring harm to my person in order to send a message. Maybe not a fatal message, but a message all the same.”

Olivia Zúniga Cáceres said she fears the motive for Molina’s shooting was more sinister than a simple cellphone robbery. “What kind of thief stalks a victim for an entire afternoon to rob a cellphone?” she wondered. “Maybe what they wanted was information off the phone, I don’t know.

“I think that what happened has a lot to do with the crime against my mother. And it worries me because if so, then it is a warning to any journalist not to mention by name the people responsible for her murder.”